October 25, 2015
I have written before (October 2014, March 2015) on the pre-WW1 stay of the Gordons at 57 Belgradstrasse, Munich and the diverse and creative company at the Fürmanns' Munich boarding house.

Cora Gordon (1950) had written, "The Pension Fürmann was then famous as the abode of the liveliest and most impoverished students, sub-editors, teachers and cranks of the city [Dering 1998]. Fürmann, a fatherly man with a kind eye and a formidable chin, had in his youth emigrated to America. On returning he inherited a small farm situated in the bohemian and formerly outlying part of the town. He added to the building and for three marks (2s. 6d.) a day you got a room and excellent board with high jinks and dancing on Saturday evenings. Once a month we paid two marks each towards the fee of a little peasant dance orchestra and also enjoyed a barrel of beer in the kitchen." "Those monthly balls were treated by us as great occasions for which we designed fancy dresses and made quite elaborate decorations."

Here, I want to share some similar observations by René Prévot (1880-1955), an Alsatian writer and journalist who stayed in Munich between 1902 and 1955. The following is my approximate translation from Prévot (1954):

"What could be better than to be a boarder with Father Fürmann? One can no longer find the magic of that environment today. The modern boarding house provides insulation from others. At Pension Fürmann there were only individualists - but without insulation. You could not be a lone wolf; you had to have an inclination to connect with your fellow human beings. The two prime rooms before me had been occupied by none other than Ricarda Huch [I wonder if this was 1912 or later]. As "Pension swank number I", I looked through five windows on three sides. This view plus an intoxicating scent of lilac on May nights, plus three meals per day, plus countless dance festivals including punch, plus Saturday afternoons dances with coffee and cake, to which you also could invite acquaintances, cost ... well, what was the cost of this fortunate Fürmann experience? Ninety marks a month. You could pay even less for something more limited. The lanky cartoonist Engert [I think this must be Ernst Moritz Engert], who lived in a tiny asbestos shack in which he could, at best, stretch out on the diagonal, paid only fifty-five marks, all inclusive. Fürmann did not employ craftsmen and if he wanted one he requisitioned a suitable boarding guest. In this respect, he commanded us like a tribal chief. And so one day saw me sitting on the ridge of the house as a roofer." 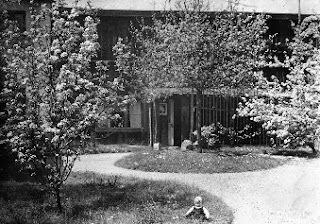 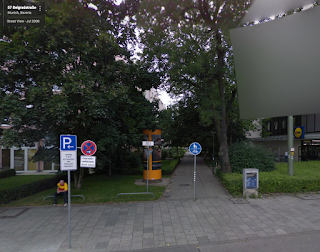 Bertram Hartman (1882-1960) studied at the Royal Academy in Munich before returning to New York where he became known for still-lifes, landscapes and scenes of New York City. A number of paintings by Hartman are signed "C Bertram Hartman München" and dated 1912 or 1913.

Ricarda Huch. Ricarda Huch (1864-1947) was an authoress, philosopher and historian. She used the pseudonym Richard Hugo.

Albert Michel. "Michel the poet" was the Expressionist writer and poet Albert Michel (1877-1915) who was killed on the Western Front in June 1915.

Jules Pascin. "Pascin" was the Bulgarian Julius Mordecai Pincas (1885-1930). When the Gordons knew him in Munich he was an illustrator for Jugend. He moved from Germany to Paris in 1905, where he was part of the group that used to meet at the Café du Dome. Depressed by critical reaction to his work he committed suicide in Paris in 1930. He was compared to his friend Modigliani as standing in "the great tradition of the romantic, bohemian artist."