July 12, 2021
Dazzle painting of ships has fascinated many since its first deployment during WW1, spawning numerous articles, books and imitations. The artist and writer Jan Gordon was one of the original protagonists; he designed dazzle patterns, wrote about the principles and practice of the art, and remembered those days fondly when later dedicating one of his books to a dazzle painting colleague, Steven Spurrier.
One of the dazzle designs produced by Jan Gordon was that for HMS Southampton and I discuss below the available information on this design. I also recently bought the book "A Naval Lieutenant 1914-1918," which gives an account of the wartime experiences of the Southampton, with several contemporary comments on camouflage and dazzle.

Camouflage of ships in WW1

At the beginning of WW1 in 1914, Stephen King-Hall (as "Etienne"), serving on HMS Southampton,  recalled,  "After the big sweep we all went to Loch Ewe to coal, and here I remember noticing the battleships suddenly break out into camouflage masts and funnels. This camouflage in those days was intended to make it harder for the Germans to take ranges of our ships, which they did by a method known as the vertical angle ; for this purpose some conspicuous vertical object is required on the ship of which it is desired to know the range."

King-Hall then tells a lovely anecdote about the response to a letter sent by a camouflage officer to a merchant skipper who had protested against the "vivid splashes of green, blue, and red with which his ship was being decorated."

This camouflage design may in part have been a result of the ideas of John Graham Kerr, as outlined in his letter to Winston Churchill, 24th September 1914 ("Protective Coloration of Ships"), but according to Murphy & Bellamy (2009), there had been earlier ad hoc efforts even before these suggestions had been made.

King-Hall continues, "After various experiments it was not considered that this camouflage was of much value, and the scheme was abandoned. Later on in the war, camouflage of the whole hull was adopted, for a different reason. The object of this camouflage was to make it difficult for a submarine to tell what course the ship was steering."

In that later phase of "camouflage," HMS Southampton, the ship King-Hall had served on for the first three years of the war, was, in 1918, decorated with a dazzle scheme designed by the artist and writer Godfrey Jervis (Jan) Gordon. More on this below.

Jan Gordon in his 1918 article explained why the term "camouflage" was not appropriate for these designs and used the expression "dazzle painting." My pet cuttlefish ("Ramses") demonstrated nicely the difference between camouflage abilities and the dramatic "motion dazzle" shown to dazzle and confuse an attacker (Ramses also happened to be very good at camouflage).

Following devastating losses of shipping to German submarines from February 1917, Norman Wilkinson, an artist who served in the Royal Naval Volunteer Reserve, proposed the concept of dazzle painting as a means of confusing the enemy submariners as to ship course and speed. Some of the products of this new programme were very similar to those of John Graham Kerr's earlier "parti-colouring" scheme of 1914-1915 (Murphy & Bellamy 2009, pg 184), but the need was great, the time was right, and Wilkinson was a naval insider, so the proposal was given the go-ahead.

The project was set up under Wilkinson's leadership in Burlington House at the Royal College of Art during September 1917. It employed artists and model makers, with female art students applying the dazzle schemes to the small wooden models, many of which are now preserved in the Imperial War Museum. The effectiveness of the "dazzle" was tested by viewing through a periscope as the models were rotated on a turntable.

The design shows many of the principles of Dazzle, including false bows and curved shapes in opposition to the curves of the ship, making the orientation of the bow unclear to observers.

Here is the dazzle scheme displayed on the port side of the ship, photographed in July 1918 (author's collection)
The ship was built in the John Brown & Co, Clydebank shipyard, launched on 16th May 1912, and was completed in November later the same year. She was flagship to the 1st Battle Squadron in July 1913 and was an active participant in the Battle of Heligoland Bight, and the Battle of Dogger Bank in early 1915. In May 1916 she also took part in the Battle of Jutland as flagship of the 2nd Light Cruiser Squadron and torpedoed the German light cruiser SMS Frauenlob whilst under attack herself having used searchlights to check the identity of the German vessel. In 1917, she joined the 8th Light Cruiser Squadron. Her dazzle design was applied in February 1918 and there are photographs of the ship resplendent in her dazzle from July, August and September 1918. The Southampton survived WW1 and was sold for scrap in 1926.

In "The London Roundabout" (1933), Jan Gordon reminisces about those times: "I was in uniform, lieutenant in the R.N.V.R., although I had never been nearer to the quarter-deck than the Royal Academy Schools, which were the headquarters of the Naval Camouflage section, under the well-known marine painter Norman Wilkinson."
The great-nephew of Cora Gordon (wife of Jan Gordon), Michael Yapp (grandson of Cora's elder sister Ida Marion), had in his possession portions of Jan Gordon's diaries for 1917 and 1918 and these were shared with Ken Bryant and then Dr. W.D.A. Smith (Jan Gordon's Godson). February to April 1918 entries contain mentions of the dazzle scheme work, including his design for HMS Southampton and views of the dazzled HMS Aquitania at the Liverpool docks.
After a first visit which found the painting not yet ready, Jan Gordon inspected the newly "dazzled' Southampton during February 1918 at Sheerness (Port Victoria). In his diary, he noted, "After lunch and Navy drinks (my head is not what it used to be), the commander and I toured the vessel. I suggested alterations to the searchlight platform."
In April 1918, Jan Gordon was visiting Liverpool docks, hoping to observe "dazzlers." In his diary entries for Tuesday 23rd April, he noted, "Just before us lying at the dock was the Aquitania "dazzler.""
On Friday 26th April, "In the dusk, the Aquitania went out looking gigantic and escorted by four lean destroyers painted white, blue and black. The painting of the Aquitania was not bad, but the bow not heavy enough and two white ventilators [] against a black and white barred bridge."

Contemporary photograph of the "dazzler" RMS Aquitania. This is the dazzle design seen by Jan Gordon in April 1918. Public Domain (Wikipedia) 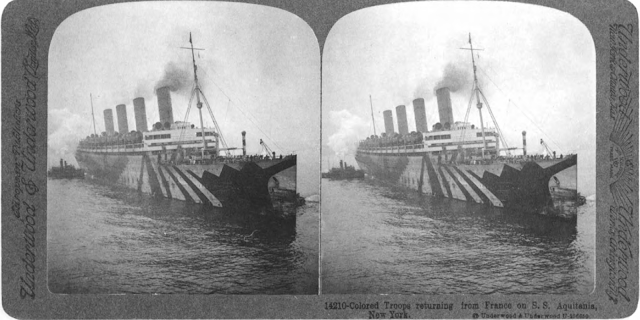 Stereopair of RMS Aquitania in New York, after delivering troops from France. Shown in Stereo World, November/December, 1987, pg 17.
Photographs of the Royal Mail Ship HMT Olympic, another giant liner (older sister of the Titanic) used as a troop carrier during the war, show two different dazzle schemes, one with more rounded shapes (as early as 1916), the other with a much more angular pattern, this latter still in place when the ship arrived at Halifax, Nova Scotia on 14th December 1918. This is the design illustrated in Jan Gordon's 1919 article.

Legacy of the Dazzle Ships

While no clear benefit of the dazzle painting could be demonstrated and dazzle ships did succumb to German torpedoes (such as RMS Leinster on 10th October 1918, Farrell 2020), dazzle design caught the public imagination for its visual impact and continues to do so in the 21st century, spawning many articles and books.
Jan Gordon certainly remembered those times with nostalgia, writing a dedication in a copy of "Modern French Painters" (1923) to the artist Steven Spurrier (1873-1961) as follows:
"To my old pal Spurrier
in memory of the purest art we ever touched. Dazzle.
Jan Gordon"

Writing the above, I remembered my one personal encounter with a WW1 battleship - the last surviving dreadnought, USS Texas (BB-35), an extremely imposing ship in person. It gives an impression of great power and solidity. These massive ships had been envisaged to be the future of naval warfare, but the last major battle between two fleets of such ships was the Battle of Jutland in 1916. King-Hall concluded that, "Jutland, if not an overwhelming victory, was a defeat for the Germans of such a nature that they abandoned all idea of ever meeting our heavy ships again - at least such is the only conclusion possible from the evidence afforded by the extraordinarily neglected state of the machinery in the heavy ships at the time of surrender." It has been argued that the major consequence of Jutland was the refocusing of the Germans towards submarine warfare. In WW2, battleships played a more subdued role, with submarines and aircraft carriers becoming the dominant components of naval warfare.

Here below are some photographs of USS Texas from 29th December 2013. 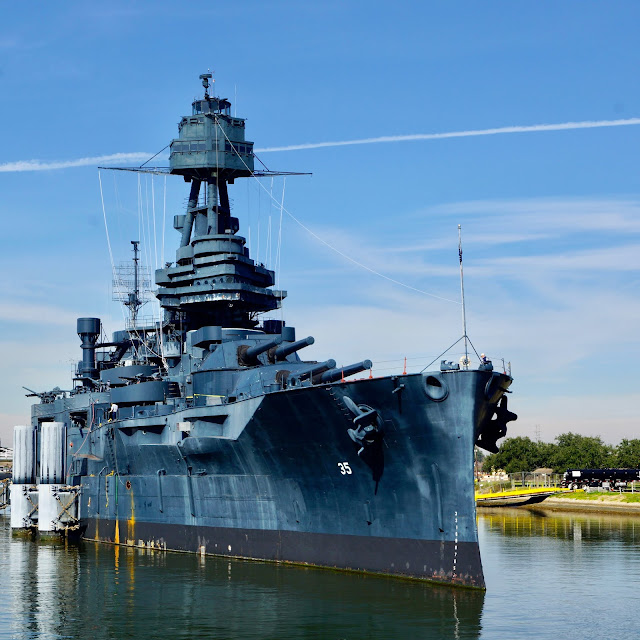 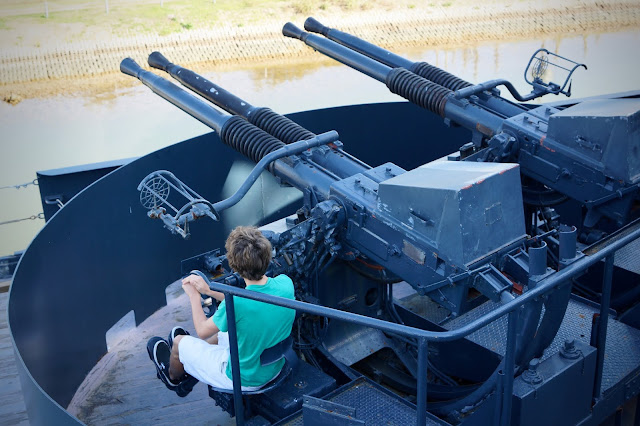 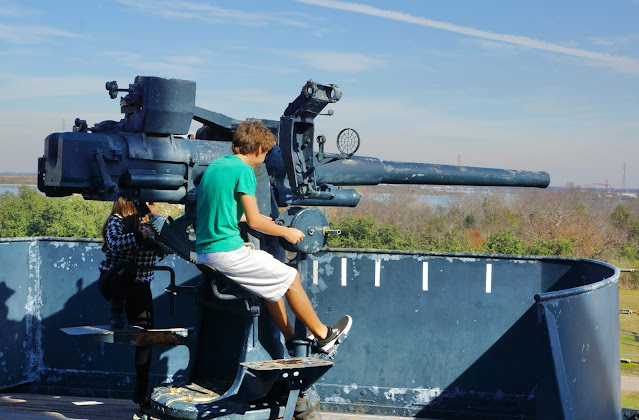 And here is one final image of this ship, this one from 1918, to convey the scale of the guns. 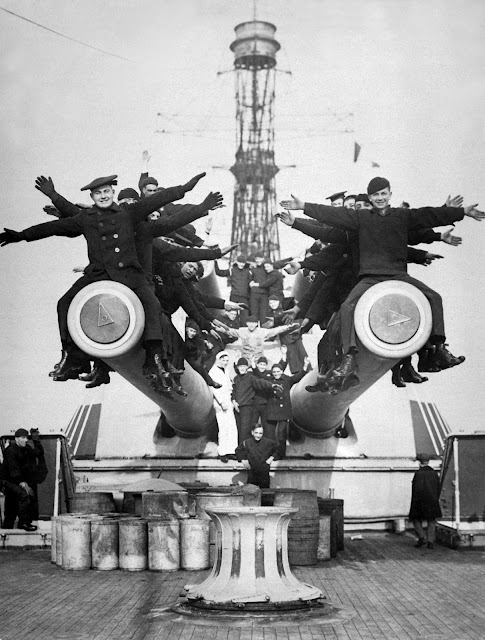