Jan Gordon and the Dazzle Scheme Project, Demobilisation in 1919

Browsing the National Archive, I came across a fascinating record of Jan Gordon's demobilisation from the WW1 Dazzle Scheme project. It shows notes in six different hands.

He was demobilised from the 1st December 1919. The record reads:

This officer is not to be demobilised. 2/19

The Dazzle Scheme Project inspired numerous articles and books, a recent example being the 2016 book by James Taylor.

Jan Gordon himself wrote about the project shortly after the war in his December 1918 Land & Sea article on The Art of Dazzle Painting. Here, he elaborated on the distinction between camouflage designed to make an object blend in with its background and dazzle designed to confuse an attacker: "and so the word camouflage, with its associations, has been dropped in favour of the more appropriate word "dazzle-painting"". I illustrated this distinction in my February 2013 article by contrasting the daily camouflage activities of my pet cuttlefish ("Ramses") with the startling black and white "deimatic" patterns displayed during an escape from a perceived threat.

The article describes how Norman Wilkinson's letter to the Admiralty of April 27th 1917 enumerated "all the objects which dazzle-painting still aims for" and how the scheme was approved by the Admiralty on May 23rd. Work on the first experimental ship, "The Industry" began shortly afterwards. 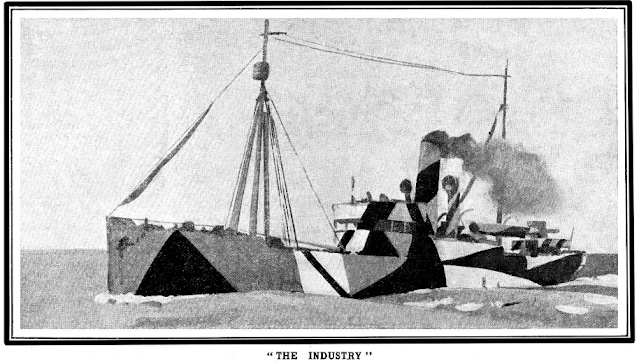 Noted artist Steven Spurrier worked with Jan Gordon in the project and Jan Gordon later sent him a copy of his 1923 book "Modern French Painters" with the following dedication:

This is an evocative connection with the story of the dazzle-painted ships of WW1. In "The London Roundabout" (1933) Jan Gordon reminisced about those times: "I was in uniform, lieutenant in the R.N.V.R., although I had never been nearer to the quarter-deck than the Royal Academy Schools, which were the headquarters of the Naval Camouflage section, under the well-known marine painter Norman Wilkinson." 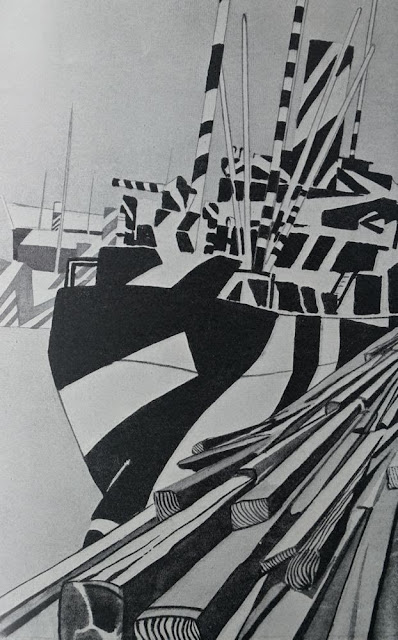 I wonder why the demobilisation date of December 2019 was so long after the war had ended, though this site states "Demobilisation of British, colonial and imperial troops did not finish until 1920, considerably longer than servicemen had anticipated."