Cooking and Writing: Jan and Cora Gordon give a return to London party, July 1932

In the Daily Mirror of Saturday 23rd July 1932, there is a paragraph mentioning Jan and Cora Gordon under the header "Cooking and Writing."

"Is there something of an alliance between the arts of cooking and writing ? Miss Helen Simpson writes novels and broadcasts on cooking, and at the party Jan and Cora Gordon gave to celebrate their settling in London after many years, dishes from many lands were served, all of which they had cooked themselves. And cooked for forty people in a very small space ! Entertainment was provided by the guests themselves and by the playing of strange instruments by Mr. and Mrs. Gordon."

This return to London from Paris is described in "The London Roundabout" (published 1933).

Over a decade ago, on April 4th 2010, I was busy with a house move (to Oman from the Netherlands) when a copy of this book arrived in the post. The book is "a roundabout trip of London, where one may catch glimpses of the four quarters of London, glimpses hurried and unsatisfying, yet containing something of that peculiar wholeness that makes up London." Reading the book during a break from moving boxes, opening them up and deciding where things should go, I was struck by a series of parallels. The book begins with a house move as the Gordons returned to London from Paris. At the time of their move, Jan Gordon was the same age as me (in 2010). Both they and I were rediscovering old treasures as we unpacked. Both the Gordons and I had spent 20 years living abroad prior to this move (though they had been back in England during the later war years). Now, in 2020, I am about to go through this experience once again.
On writing and cooking, it's interesting that my grandmother Doris Smith (pen name Doris Ives), friend of the Gordons, became a writer of well-known cookbooks and cookery articles in magazines. Her 1928 "When the Cook is Away" featured an early Cecil Beaton cover. 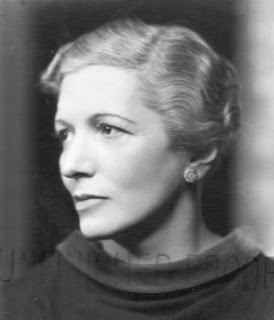 Doris Smith (1888-1951) wrote (under the name Catherine Ives) cookery books and articles, many in Britannia & Eve,