March 11, 2014
LifeArtEarth developed into a strangely eclectic mix of family history, natural history and art (in particular that of Jan and Cora Gordon) so, in search of a little more order, I'm gathering all of the art posts into a single thread. This was the first of those posts.


On April 4th 2010 I was busy with a house move when a book, “The London Roundabout” by Jan and Cora Gordon (published in 1933), arrived in the post. The book is described as "a roundabout trip of London, where one may catch glimpses of the four quarters of London, glimpses hurried and unsatisfying, yet containing something of that peculiar wholeness that makes up London."
Taking a break from moving boxes, opening them up and deciding where things should go, I began to read, and was struck by a series of parallels. The book begins with a house move as the Gordons return to London from Paris. At the time of their move Jan Gordon was the same age as me. Both they and I were rediscovering old treasures as we unpacked. Both the Gordons and I had spent 20 years living abroad prior to this move (though they had returned to England during the later war years). 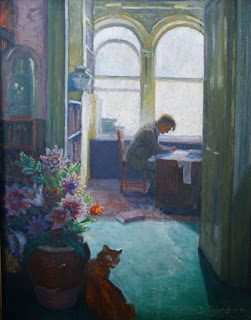 The Gordons had moved into a flat in Clanricarde Gardens and from there wrote books and articles, painted a distinctive series of London scenes, and played their guitars. Jan died here in 1944 and Jack Bilbo wrote a moving obituary in "The Studio". 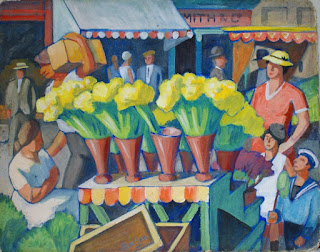 Our house move back then in 2010 was in an environment in most regards not very similar to London, as a tour of the garden and the view from the balcony will show. This was also a great place to sit on the doorstep and watch the moon.