Jan and Cora Gordon: Behind the Film

March 11, 2014
A large hard back book printed in 1935 just arrived. Its title is “The Big Book for Girls”, but what interested me was the seven-page article by Jan and Cora Gordon called “Behind the Film” 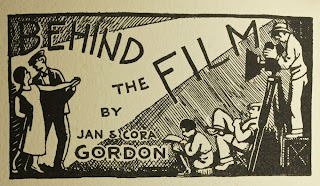 They start with a small story about how widely appreciated the cinema already was: “The film has even penetrated to the Arctic Circle, where on one occasion a righteous Eskimo dashed from the audience and stabbed the villain while the surrounding white men remained callously in their seats.”

They go on to describe the process of film-making and the “self-hypnotism” of the actors, informed by their visit to Hollywood seven or so years earlier. The full story of that journey was published in 1930 as “Star-Dust in Hollywood” and began with Jan Gordon recuperating in a Los Angeles house. When I visited Los Angeles in April 2012 I found that many of their observations still resonate today, eighty five years later.

In "Chaplin: The Mirror of Opinion", David Robinson writes that Jan and Cora Gordon " .. were shrewder prophets and commentators on the fickle character of the American public [than Charlie Chaplin's biographer]." Writing about Chaplin's films the Gordons wrote, "The children and the poor ensure his overwhelming success. But the bourgeoisie instinctively repudiate him. He stands for something that denies the whole of their collective philosophy." Unfortunately the Gordons did not meet Chaplin during their visit. They had avoided a casual meeting, worrying that "his star-meets-the-public manner should be a masterpiece of polite camouflage."


Returning to the "Big Book for Girls" article, the Gordons remark that “Hollywood, although it is stamped on one side by the astounding riches of the stars, is equally remarkable on the other for the grinding poverty of the extras. In this case the golden cloud has its leaden lining.”

Finally they warn their audience of girl readers, “ To the pretty girls who still pour in from all over America the central casting bureau behaves as the authorities in Monte Carlo treat the ruined gamblers. It sends them to the station, buys their tickets, and packs them off home.”

The book was published by Oxford University Press and I recently found that they had published the exact same story in "The Oxford Annual For Girls" four years earlier in 1931.