March 11, 2014
As a youth I would hear stories about Jan Gordon and his guitars, for example one about a border crossing at which the customs officer charged duty on a cheap new guitar and nothing on an old and valuable instrument. The story deepened for me on reading "Poor Folk in Spain" and "Misadventures with a Donkey in Spain"; and then even further, in the summer of 2009, when we followed in the footsteps of Jan and Cora Gordon with their donkey, Colonel Geraldine, on the second of their Spanish journeys.

Both Jan and Cora made some fine paintings, drawings and etchings during and after this journey, such as this one by Cora and this by Jan (the favourite picture of "Telephones" on their return to London in 1931). Perhaps my favourite of their Spanish works is the etching shown below. 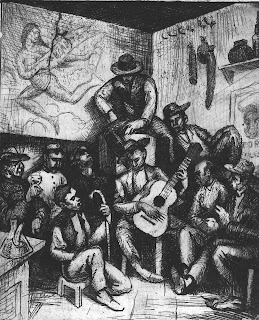 Paco, the chief of police, plays guitar at José’s in Puerto Lumbreras.

The wonderful thing about this picture is how well it illustrates the narrative in the book (from 90 years ago now):
“Pepe Macho perched on a superior packing-case high above us ... some wandering sign-painter had depicted clumsily enough the figure of a semi-nude woman running with a bottle in her hands, her body wrapped round with a flag to advertise some popular brand of anisado.”


A prettified painted version of this scene, now in a Glasgow gallery, has lost the spontaneity of the image shown above, as well as the anisado-bearing nude.

Delightfully, it is still possible to find great flamenco in Almeria, a place with a very strong guitar tradition and the home of Antonio de Torres (1817-1892), who is credited with establishing the design of the modern guitar.