Jan and Cora Gordon and "Many-sidedness"

March 11, 2014
I was thinking today about what an interesting couple Jan and Cora Gordon were. From their marriage in 1909 to Jan’s death in 1944 the output of paintings, drawings, etchings, books, magazine articles and concerts seems remarkable. For a way in to their world of travels, art and music visit these pages: Art of Jan and Cora Gordon. 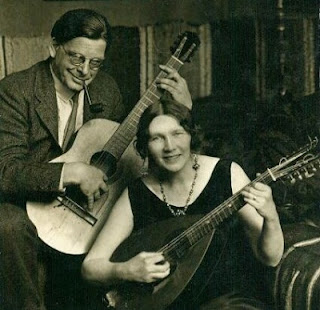 I like this comment from one of Jan Gordon’s obituaries: “Mr Gordon's many-sidedness had a touch of the Italian Renaissance.”

I also like Jack Bilbo’s comment in the October 1944 issue of The Studio magazine: “I remember when he and Cora used to sit in my den on Saturday afternoons when the gallery was closed, when we exchanged travel experiences from Spain and Yugoslavia, from Mexico and Scandinavia, or talked about artists and paintings, how the four walls of my little room seemed to move away into far distances.”

I know some highly multifaceted, well-travelled and creative personalities today, but can’t think of anyone quite as productive as these two.

On a quiet Sunday afternoon, rereading Jan Gordon 's " GRADUS AD ... MONTPARNASSUM " (Blackwood's, March 1929, under his "Salis" pseudonym) I wondered who the character known only as "K" might be.  The text states that, "K --- has since climbed to eminence, the button of the legion of honour, the front page of a great daily, poems in profusion, and a number of plays; but in those days he clung to a paper which hung on the edge of bankruptcy, and was the author of one slim book of verse in praise of opium dreams, a long way after Baudelaire." "K" chose Jan and Cora Gordon to exhibit their work at the art gallery of a fashionable photographer he "had been of service to", referred to in the text as "M".  The show "was noticed favourably" and Cora sold (to a diplomat, perhaps Paul Morand ) "a big exuberant drawing in colour of the Cleopatra-cum-anachronism period." Jan Gordon was not
Read more