Jan Gordon and the "Dazzleship" at the Little Art Rooms, 1919

March 06, 2015
P.G. Konody, Jan Gordon's mentor at "The Observer", reported on Jan Gordon's 1919 "War and Peace" exhibition of water-colours at the Little Art Rooms, next door to the Adelphi Gallery (The Observer, March 16, page 9).

"He, too, has been attracted by the witchery of the "Dazzleship" which seems to draw every painter - every painter, at least, who has as pronounced a feeling for definite form, effective pattern, and emphatic colour as Lieut. Gordon. When he recorded his impressions of Serbia, at the time when he was doing Red Cross service with the defeated Serbian armies, he embodied his love of definition and bright colour in a series of drawings, some of which figure in the present show. That his preoccupation with broad decorative effects does not preclude subtle observation of significant details is proved by such touches as the nervous action of the hand holding a cigarette in the character study, "Albanian Merchants in Scutari." "Serbian Retreat in the Ipek Pass" strikes a grim dramatic note. As far as his art is concerned Lieut. Gordon's trip to Serbia was an accident ; he is the last man to find it necessary to travel far afield in search of the picturesque. He finds it wherever he happens to be - in a "Cornish Garden" or "A Farmyard," and particularly in "Regent's Park." 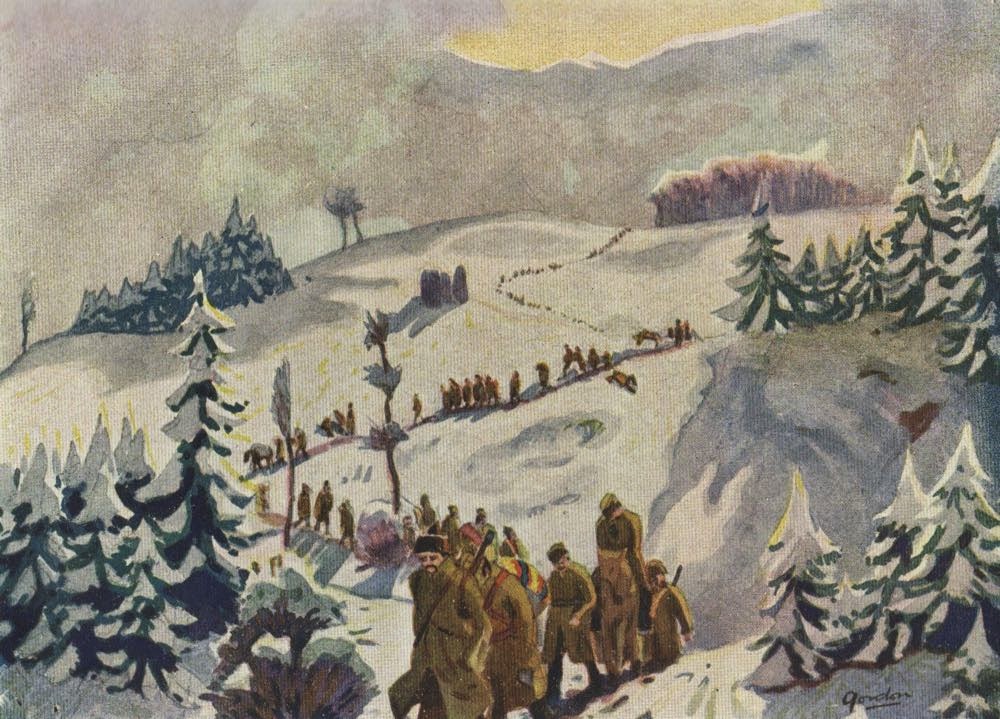 "The Ipek Pass in Winter" from "The Luck of Thirteen."