Jan and Cora Gordon, Pictures of Southern Spain at the Burlington Gallery 1921

March 07, 2015
Jan and Cora Gordon exhibited their pictures of Southern Spain at the Burlington Gallery in early 1921 (Observer, February 6th 1921, page 8): "Mr. and Mrs. Jan Gordon's Pictures of Southern Spain are on view at the Burlington Gallery." The same paragraph contains a note on "That inimitable humourist, Mr. H.M. Bateman," collaborator on Jan Gordon's last book, "Art Ain't All Paint."

The Times (October 13, 1922) contains a note on the impending release of the book describing that journey.

""Poor Folk in Spain," by Jan and Cora Gordon, which Messrs. John Lane have nearly ready, contains the unconventional record of a vagabond journey made by two artists, who, feeling an imperative need of escape to some sunny place where the war had not been, were finally decided by an exhibition of Spanish landscapes by Wyndham Tryon. Their narrative is not a book about Spain in the ordinary sense of the word : it is a book about themselves, with Spanish peasants and villages in the background, and reproductions from their own sketches." 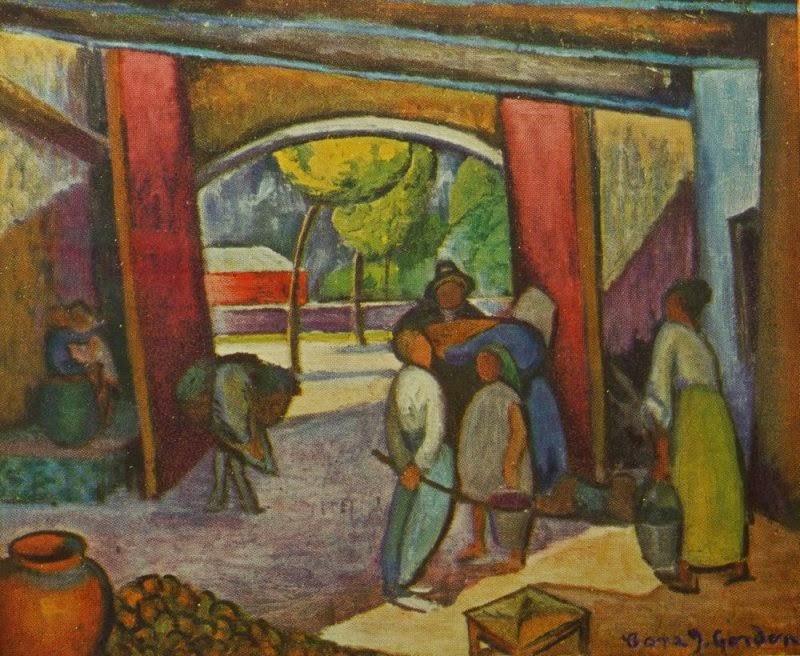 Frontispiece of "Poor Folk in Spain", "A Spanish courtyard" by Cora J. Gordon.