August 26, 2016
A hundred years ago today, my granduncle Cameron died in France, near Delville Wood during the Battle of the Somme. Jan and Cora Gordon knew Cameron's sister (Doris Smith) well and visited the Smiths during wartime summer holidays.

Jan Gordon wrote about WW1 war art and his introduction (writing as John Salis) to "BRITISH ARTISTS AT THE FRONT" seems particularly appropriate to mention here.

He wrote: "Mr. Nash joined the Artists' Rifles at the outbreak of war. He was for a time Mapping Instructor - amongst his colleagues being Maresco Pearce and the late Edward Thomas - but he was commissioned later in the Hampshires. The war, which has had the effect of numbing most men's brains, awoke his to new realities ; he saw the torn soils of Flanders, and in 1917 showed a series of sketches - executed partly in the field, partly in Hospital. The artist who could understand luckily did not remain silent. He became one of the official British Artists and was sent to the Front. His drawings are a full record of what war means to Nature. These drawings seem torn from the sulphurous rim of the inferno itself. I know no other artist who could have made them."

It is frightening to read about the conditions facing these young men on the ground. 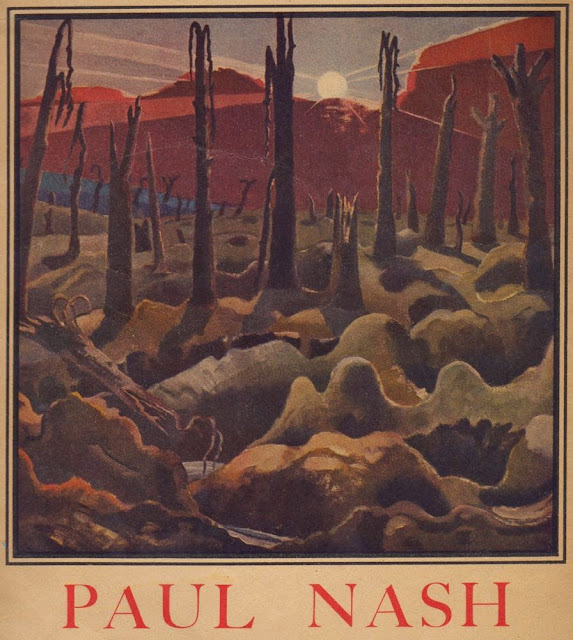 "Sunrise: Inverness Copse," by Paul Nash, purchased for the Imperial War Museum. "Inverness Copse, through which the famous Ypres-Menin road runs. North-West of Gheluvelt, was one of the most stubbornly contested patches of ground along that much battled highway. A quite appreciable portion of its present surface soil has walked the earth in Germany, Great Britain or Australia."