January 07, 2017
The Oakland Tribune of December 9th 1923 gives the following review to a newly published book by Jan and Cora Gordon:

"Two Vagabonds in Spain Is Delightful

There are nearly as many travelers as there are pairs of feet, but there are not two in a thousand who contrive to put into a record of their wanderings the very color and vividness of impression which place and people have left upon them. Jan and Cora Gordon, English artists, spent a summer and autumn in the hill towns of Eastern Spain, Murcia, Alicante and Verdolay. The story of that sojourn, illustrated with their own whimsical sketches and titles, "Two Vagabonds in Spain," is a delightful bit of writing.

The authors have crowded into their book the sights and sounds and smells, the simple people and their simple manners, the texture of hill and house-top and have given the telling a fine and breezy flavour." 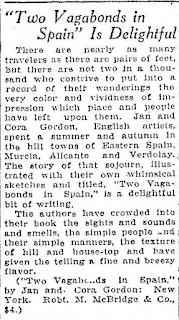