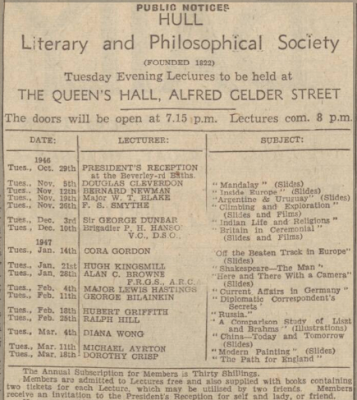 1931. Sheffield; "I do know that Cora Gordon is going up to Sheffield at the end of the month to give two or more lectures about the travels which she and her husband have done together. Their books tell you a lot about these, but you have to hear them talk and play those wooden instruments from Albania to get the colour and fun of it all."

1935. "With a Ruc-sac Through Europe" at the Hull Young People's Institute. "According to schedule her talk “With a Ruc-sac Through Europe,” should have been illustrated by lantern slides. But in leaving home Mrs Gordon had picked up the wrong set of slides. It was therefore arranged that she give the ruc-sac talk first, without slides, and then show the other pictures. Mrs Gordon’s opening words were: “It seemed to us always better to travel without money than with it. If you travel with money, you can’t help going to a decent hotel. And if you go to a decent hotel you find the same accommodation. But if you are counting your cents very carefully, then you always go to the most uncomfortable – and probably most characteristic – little hotel.”

1937. "Vagabonds in Europe" in the Pump Room, Bath. "Cora Gordon, joint author of 'Misadventures with a Donkey in Spain,' and the 'Vagabond' series of travel books by Jan and Cora Gordon, will give an illustrated travel talk at the Pump Room, Bath, on Friday, Dec. 10th, at 5 p.m., entitled, 'Through Europe on Foot and Horseback.' Jan and Cora Gordon went abroad to paint pictures. Having little money and a strong desire to stay as long as possible, they went to a small town in Spain. Their adventures were so unexpected and characteristic of the country that the book about these experiences, written and illustrated by themselves, 'Two Vagabonds in Spain,' was a great success. Having tasted the delights of living cheaply in one country, Jan and Cora went further afield, trying the Balkans, Lapland, Portugal, Hollywood and the Arran Isles. No matter where they went, amusing and characteristic adventures occurred, partly due to their occupation as painters and partly through their pursuit of folk music and poetry, which brought them into close contact with everyday people."

The last public lecture by Cora Josephine that I am aware of took place in Glasgow during March 1948. She died in July 1950 and links to her obituaries can be found here.