August 05, 2017
Browsing old 1931 copies of Britannia & Eve, looking for articles by my grandmother (nom de plume Catherine Ives), I came across an article by Jan and Cora Gordon on "The German Girl and her Grandmother."

The face belonged to " a hurdle jumper who had leapt into a week's fame by breaking the last female record for this rather recondite sport." The Gordons were struck by the emphasis on sporting prowess amongst the young German ladies.

Writing about the Munich "cult of the Tyrolean peasant," they paint the following picture: "Sometimes you may see four generations at a beer garden table listening to the yodelling fiddlers, who are popular even in Prussia. A solemn sunburnt cherub in a mere frill of a frock sips beer on the knee of its athletic young mother, who looks very trim and slim in her inexpensive sports garment. Grandmother, square built and modestly skirted to the ankles, wears the abnormally high-crowned hat which found favour with fashion about five years ago. Great-grannie, a wooly bonneted old peasant, trails bunchy skirts which reveal heelless cloth boots." 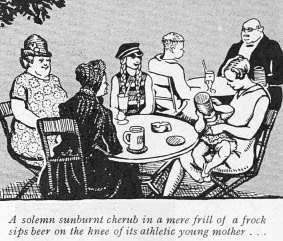 They go on, "Our first view of Germany's new type of woman was on the lawn of a schloss in which we were spending a week-end." "Tall and lithe, with a clinging white sweater, she stood surrounded by scrambling children. We watched her antics with a curling, curving rope. Throwing a lasso with the agility of a movie actress, to our delight she caught the demure nursegirl well below the middle and in a moment spun her out of decent nursemaid dignity into a chaotic whirl of arms, skirts and legs." Their proud hostess informed the Gordons that this was "our nursery governess, Countess X. She is most satisfactory, a brilliant sportswoman, particularly gifted at tennis and horse-training, very good with children, and remarkable in times of sickness. Unfortunately for us, she wants to experience English life as nursery governess in some big country house where all her gifts will have full play."

A second encounter was with a a young woman riding pillion - "Her pretty curls wilfully fluttered free from her regulation beret. Otherwise she was enveloped in the neat imitation of an engineer's overall adopted by the women pillion drivers of Germany." The Gordons were riding "our old motorbike with its side-car wardrobe" and had to explain this "odd turn-out" to the young couple.

In the book "Three Lands on Three Wheels" (not yet published at the time of this Britannia & Eve article), the Gordons explained the origin of their makeshift sidecar, "It was a piece of ironwork that had rusted for many years among the debris of the agent's store, and he added it for the modest sum of an extra pound. It was only a skeleton and on its empty springs we placed a long box, some five feet by two and a half feet square, which, painted a natty green, gave us what we hoped was an air as respectable as that of any baker's boy with his moto delivery-van." A French neighbour had exclaimed: "Mais, voyons, c'est une véritable armoire ambulante!" which translated into English became "The Wandering Wardrobe."

Reflecting on their encounters with healthy and athletic young German women, the Gordons observed that, "Fashion proves herself to be stronger than Art, and Nature does seem to follow Fashion. Comparing the wasp-waisted ladies of the 'eighties with the bean-poles of to-day, one could hardly imagine that they belonged to the same species, or, indeed, to the same family. The whole change that has come across the German woman is notably marked in her physique. The full-bosomed, short-legged German frau has not only flattened, but lengthened in the leg to an extraordinary extent. And with the lengthening of the leg there is no doubt that much of her old sentimentality has gone. She is no longer the plump, simpering dependent whose head has been stuffed with ideas of mawkish love until it suffers from a kind of fatty degeneration of the emotions."

The Gordons were perhaps well placed to make these kinds of very interesting generalized observations given their earlier stays in Germany, such as their time at the Pension Fürmann in Munich before WW1.