October 14, 2017
I came across the following review of "Two Vagabonds in Sweden and Lapland" in the Dundee Courier - Friday 16 July 1926. This book was one of Jan and Cora Gordon's "Two Vagabonds" series and includes, amongst many others, stories about "The master fiddler" and pagan music. 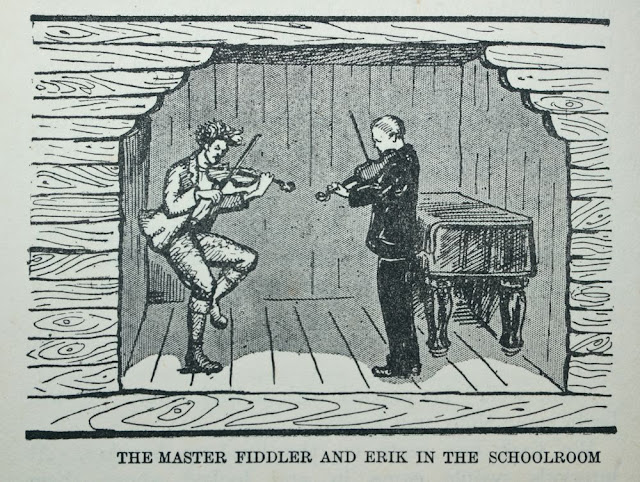 SIDELIGHTS ON LIFE IN SWEDEN

The menu of what was simply an ordinary lunch in Sweden will astonish most people as it certainly astonished these two clever itinerants, Jan and Cora Gordon, who have just published "Two Vagabonds in Sweden and Lapland."

Swedish men and women, we are told, eat breakfast at eleven and lunch at four. The variety and magnitude of the viands on the luncheon table suggests baronial feasts of the Middle Ages.

In a hotel dining-room the first thing that strikes the eye is the large table, centred with a mountain of butter, which is flanked by tall stands upon which various kinds of bread are heaped—hard bread, black bread, honey bread, &c. Herring, anchovy, salmon, sardines in a dozen forms, cucumber in sweet sauce, olives, tomatoes, meat balls, eggs in infinite variety, reindeer meat, hams of many lands, minces, cheese of all nations, caviare.

And the foregoing is only the prelude. You go round the table on which these dainties are spread, pick and eat what you want, and then sit down to liberal dinner on the European plan. After continually gorging on this scale day in and day out for year, the wonder is, the writers remark, not that some Swedish gentlemen are fat, but that any have remained thin.

One thing the Gothenburg system has achieved in Sweden is to provide a brew of very weak beer. There's an amusing story of this tame stingo in the book. Once Danish brewery hands went on strike. In order to supplement the lack of beer in Denmark, the publicans imported it from Sweden to tide over the period of the strike. But the Danish brewery workmen no sooner had tasted the Swedish brew than they unanimously decided to break the strike.

Even to Lapland the Gordons went. They visited the Swedes in their remote farms and the Laps in their tents and log huts. Many of the quaint customs that prevailed in Scotland years ago still survive in Sweden, such as the vigorous dances and rejoicings at the marriage feasts.

But Sweden has a good many discomforts. You may be able in summer time to read a newspaper at midnight and even see the sun above the horizon for the whole twenty-four hours, but there are millions of winged pests that make life a torment.

When the artist started out to make pictures for the book he generally attracted a crowd of mosquitoes. This is how the painting proceeded:-

A curious custom of the Laps is that of salting their coffee instead of sugaring it. "They gave us coffee," say the authors, "not too salt, and reindeer milk, which is as thick, or thicker, than our cream, and has a strong flavour. The reindeer affords very little milk, but richness and quality make for quantity.

"Bread and salted butter was brought in, as also some ribs of dried reindeer meat, from which, with his knife, the master began to split bones and slivers of meat, which he handed about. The babies all drew their knives also, and each set to work, peeling the bones and devouring with relish.

"It the custom to give each child almost as soon it can walk a knife and dog, which guards the child everywhere. A baby of three years fell into anger with its dog, who wanted to share the bone. The child attacked the dog with the knife, flourishing it determinedly in the animal's face." The book is quaintly illustrated by the authors.

"Two Vagabonds in Sweden and Lapland," by Jan and Cora Gordon. London: The Bodley Head. 12a 6d.