Cora Gordon in Belfast 1935 - "Through Europe with a Rucksack"

February 29, 2020
Today, I came across a reference to Cora Gordon visiting Belfast and talking about experiences in the Tyrol, Spain, Lapland and Albania. It's in the "Northern Whig and Belfast Post" of Friday 03 May 1935.

She was addressing the Alpha Club (at a luncheon meeting in the Carlton) on the topic of "Through Europe with a Rucksack."

She declared that, "In order to travel successfully things must go wrong, and you must have an utterly inadequate supply of money."

The article records that, "she explained the methods of travel adopted by herself and her famous husband, Jan Gordon. They chose the most out-of-the-way places for exploration and thus avoided that 'tourist' atmosphere. She thought it was good to travel with a job. She and her husband had painting for their job, and on one occasion this brought an amusing honour. Mrs. Gordon was doing a series of illustrations of religious subjects in the Tyrol and gradually she acquired the reputation of being a 'holy woman' because of her connection with such works.

"Mrs. Gordon told how they had wandered the by-ways of Spain in a donkey cart and were nearly arrested on the suspicion of being smugglers. From a village plumber who played the Spanish lute she learned the Spanish flamenco music, and came to appreciate the difference in the voice-production of the gipsies of Spain from the type employed in England. Their method of singing might strike the Englishman as being peculiar, but the English method of singing as exploited by Jan and Cora Gordon in a Spanish village caused all-night merriment there."

"The Laplanders, too, have an unusual voice-production, as they discovered during a walking tour in that country. For the surprise they occasioned the Laps described the English as being "just like little mice running about." In Albania they had other difficulties to contend with, as there it is considered contemptible to show any signs of hunger and tiredness. They have, too, the custom of giving anyone they wish to honour the roasted eye of a goat, which must be eaten. In this province, women have a definitely inferior position - they walk behind their husbands when they go to market, and it is they who carry the parcels."

"But, wherever they travelled in Europe they found goodwill and courtesy. One thing alone was necessary, and that was that they should be prepared to eat anything - from the coffee served with sugar, salt and cheese that is considered a delicacy in Lapland to the curried rice and fleas they fed on in the Serbian retreat. 'A venturous digestion is really the main thing to take with you when you go travelling.' concluded Mrs. Gordon.

The Countess of Clanwilliam presided the meeting.

Cora had given a similar talk in Hull earlier in the year and continued to give public lectures over the years, through to 1948. 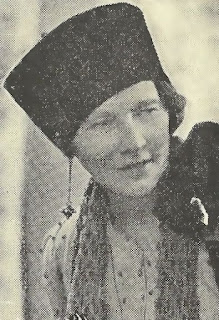