After watching the WW1 sequences in "Tolkien" last night, I found myself revisiting some of the WW1 writings of Jan and Cora Gordon. Their early Serbian experiences in the war were documented in "The Luck of Thirteen." An interesting and appreciative review of the book appears in Land & Water, 23rd March 1916, as follows:

"Mr. and Mrs. Jan. Gordon, wandering in Serbia, have perpetuated an exceedingly inconsequent volume in The Luck of Thirteen (Smith Elder and Co., 7s. 6d. net), which is as scrappy as a feminine conversation, and at the same time thoroughly fascinating. Here and there the grimness of war stands out with startling realism, and the fate that has befallen Serbia is tragically limned in vivid sentences, then one is caught away from horrors by the femininity of "Jo," and again interested in some Serbian Comitaj or Biilky municipal dignitary. It is all "live" and full of the spirit of courage and energy in a time of utter tragedy. Some fine illustrations and certain clever little drawings complete this extremely interesting war book, which is far more worthy of more than the great majority of publications of its kind."

Prior to the publication of "The Luck of Thirteen," Land & Water, 23rd December 1915 carried the following account of the great Serbian retreat by Jan Gordon.

"WE spent half of the night of the 30th of October on the roof of a Serbian train, the other half in a telegraph office at Kralievo, which lies to the north of Nish, lulled by the sonorous sleep of two French surgeon-majors who were using the large table as a four-poster bed. In the station trains were being shunted almost continuously, and in the few intervals of silence one could hear the faint boom of the distant cannon. With the dawn of the next day the Serbian Headquarter Staff left Kralievo for Rashka. Nish had been evacuated, Kraguevatch occupied by the Germans, and Mladnovatch by the Austrians, thus turning the strong defences of Ovchar and Chachak upon which the Serbs had placed such hopes ; and the Serbian army was falling back as rapidly as was possible.

We ourselves took the road on the morning of the third. The route was crowded with wounded soldiers, Austrian prisoners and Serbian boys whom the Government had formed into battalions. We all reached Rashka in three days and shortly after Kralieo had fallen, as had Tr.tcrnick and Krusevatch. The Austro-German forces were thus shepherding the Serbian army towards Kossovo, that fatal plain where the old Byzantine culture had crumbled beneath the onrush of the Turk.

I have heard this final flight of the Serbian army spoken of as though the operations had been taking place in Belgium, many seem to have ignored that country described as mountainous means country in which paths are few and far between, and roads as peaches in May ; there are only three by which material could be retreated ; one from Kralievo to Rashka. one from Krusevatch to Mitrovitza, and one from Nish to Pristina, and all of them bad as only Serbian roads are bad.

The Headquarter Staff moved to Mitrovitza, while I, ignoring advice to the contrary, passed on to Novi Bazar. The Serbians had persuaded thertiselves that Skoplje must be retaken by the French in very few days - although the French troops were not then at Veles - and so, instead of ridding themselves of their encumbrances - that is, the children and the Austrian prisoners, by sending them along the route we followed, Novi Bazar to Beranc ; they kept them at the rail head, hoping for the impossible. From Mitrovitza growing danger drove the Headquarter Staff to Prizren, whence a few days later it fled to Scutari, escaping (only by a few hours) from a Bulgarian band sent to cut them off.

The Serbian army was now completely hemmed in on the plain of Kossovo. To the south the Bulgars held Skoplje, the railway, the Katchamk pass and straddled the road to Scutari. to the north the Austro-Germans had driven the Montenegrins from Chanutza and were attacking Plevlie and Bielcpolje and another detachment were moving on or had occupied Siemtza. The Northern Serbian army had defended more than two-thirds of the frontier, including Chabaz, Obienovatz Belgrad Seme- dria Zaichar and Pirot,'and it is probable that a full two-thirds of Serbia's total armv. say 200,000 men, were thus locked up, and this army with all its guns, provisions, and transport was thrown back on Jakova, Ipek and Novi Bazar Already its condition was deplorable, and even While the Headquarter Staff was yet at Prizren, the soldiers were in such pitiable plight that they were eating roots and dead horses. 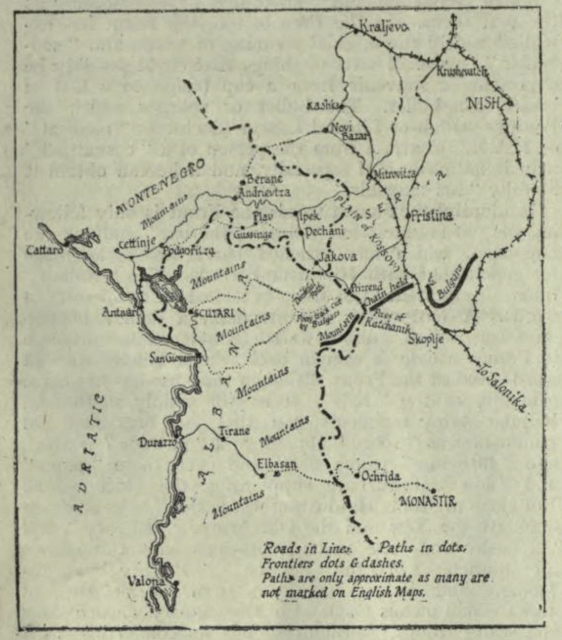 Map showing the paths referred to in the account

Behind were the barren mountains of Montenegro and high Albania, in front the enemy whom they could not repulse. Behind them the three roads were dwindling into three pony tracks, Uechani to Podgoritza, passing by Plav and Gussigne, Ipek to Andrievitza, and Novi Bazar to Berane. The first two, passing through terrible stony country, mounting high up into the snow with its autumn avalanches, are only passable to foot and pack-horse and in these wild solitudes where one sees but rock, houses are six or seven hours apart, and even in summer-time food is difficult to procure. The latter route, passing "through country slightly more generous, though still poor, is blocked at Beranc— the bridge is washed away— by a deep and rapid river.

The task of getting this army through these three passes would resemble that of pouring sand from a bottle grain by grain, and if it has been accomplished the Serbian command has performed a miracle far greater than that of the defeat of the Austrian punitive expedition of last year. But once in the mountains, what then?

The mountain Albanians will give no food to their old enemy the Serb, but the latter will not hesitate to help himself, looting and burning the Albanian houses when grain is not forthcoming, and the Albanians will retaliate, shooting down the wretched starving soldiers in a country that is ideal for the sniper.

What can be the final fate of the Serbian army and of the Serbian children? Starvation and murder awaits them in the mountains, and capture in the plains. And the plight of the Austrian prisoners, whom they have dragged with them in their flight, is even more terrible, for there is still death in the mountains, but for them the plains offer no better protection. Most are Czechs, Bohemians and Croats and, long suspected of infidelity to Austria, they surrendered by thousands to the Serbs last winter. Of the regiments which retreated into Austria one man in every ten was shot "pour encourager les autres," and it is probable that of those who surrendered not one man in ten will escape what Austria considers to be a punishment for treachery.

If the Serbian army is to survive it must have food and clothing, flour, sugar, blankets and boots at once ; it is of no use adding Bovril, or butter or condensed milk, for the Serb will have none of these. The problem of how and where is however difficult.

The Italian forces have landed at Valona, but what are they going to do there ? They may force their way inland towards Monastir and be an annoyance to the Bulgar or Austro-German flank, but they can give little help to the poor Serb. There are no passes south to north, and the snow on the mountains would make communications almost, and the transport of stores from Valona, quite impossible, even if the enemy had not occupied Elbasan. From Durazzo again the snow is a chief though not the only bar. The horses of the Peninsular have been terribly depleted, both by three wars and by insufficient food. Pack animals cannot oe conjured into existence, and especially pack animals combining the qualities of horse, goat, and monkey, such as are needed in these mountains."