September 27, 2014
Francis Carco's "The Last Bohemia" (1928) provides a vivid account of Tuesday evenings at the Closerie des Lilas in the pre-WW1 years, events at which Jan and Cora Gordon were also present:

".. the Closerie des Lilas where we assembled beside Paul Fort on Tuesdays, in an indescribable uproar mixed with the shouts of the poets. It was a magnificent period. We drank. There were arguments. One added one's saucers to one's neighbours without any shame whatsoever and jumped at once into the discussion, taking sides ..."
"Paul Fort's long hair, his sombrero, his black tie, his small coat buttoned right to the top, his simplicity, stood in contrast to the ornaments which women of all races, Swedes, Russians, Spaniards flaunted here and there under our eyes." 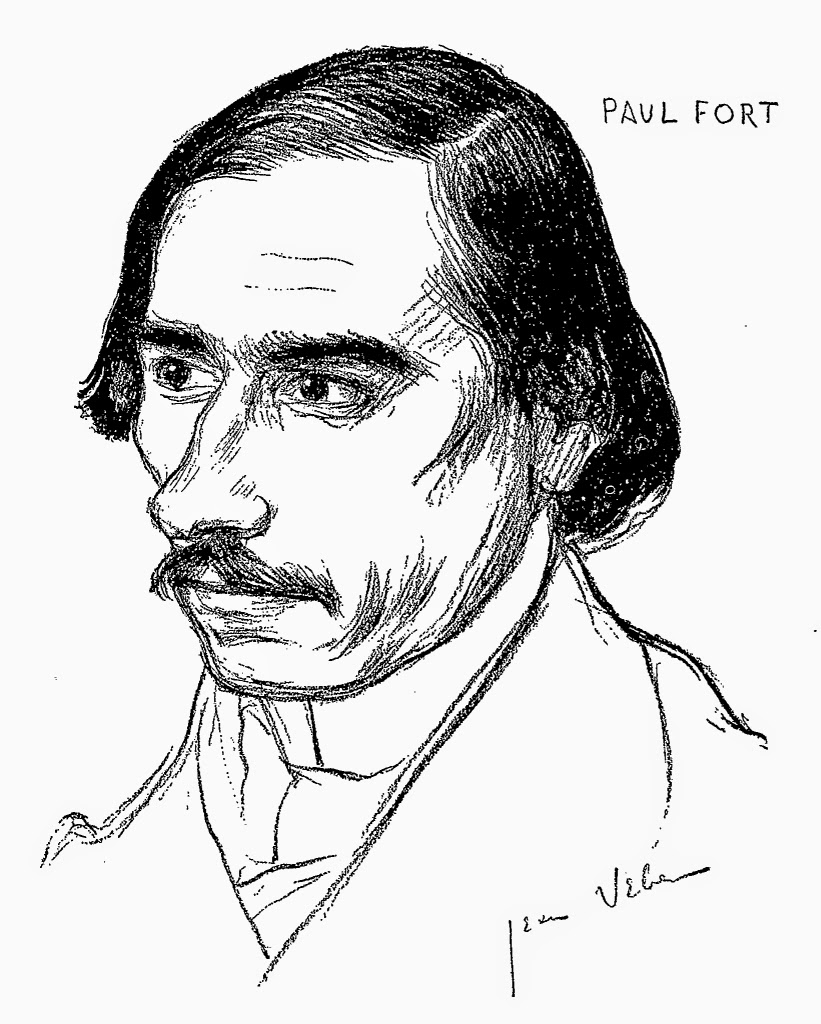 
"The collaborators in the review Vers et Prose which he directed gave him his cues. Salmon, with his angular profile, Guillaume Apollinaire, Guy Charles-Cros, Louis Mandin, Alexandre Mercereau, Fuss-Amore, who was amused at everything, his friend Tancrede de Visan, Bersaucourt, Max Jacob, Gazanion and painters [including Jan and Cora Gordon], boxers, critics and beggars who, like the wild animals in the legend, followed Orpheus and drank with him."

The extravagant anointing of Paul Fort in 1912 as "Prince of Poets" is described in volume 36 of "The Bookman." According to Jan Gordon, his "commonplace conversations were as often as not the fragments of some unpublished poem, but who spoke so indistinctly that a full half of his words were unintelligible even to Frenchmen."

On the painters at a later series of Tuesday evening gatherings at the nearby Café Flore, Francis Carco wrote: "... I recall how little authority real artists like Dunoyer de Segonzac, Luc-Albert Moreau, Modigliani, had at the talks on Tuesdays at the Café Flore [about 2 km from Closerie des Lilas]. The first two have arrived since. As for Modigliani he is dead and has reached since his death the first rank he should have occupied during his life."

Carco remembered the days before the outbreak of war, the end of that phase of artistic life:
".... I remembered that a month before an old woman who told fortunes by palmistry, on the terrace of the Closerie des Lilas, had stood, without saying anything, so frightened was she on discovering what she alone could see.
"Well, little mother? What is the matter?" but our questioning had been in vain.
The old woman, with her arms raised to heaven, had begun to weep."
"..... In spite of myself, stupidly tightening my fists so that I would not be tempted to learn what no man perhaps must know, I put them in my pockets and went quickly away."

As Jan Gordon remarked, in the ensuing years, "pictures or poems go halting; brutal reality has swallowed up idealism."