December 25, 2014
The second leg of Jan and Cora Gordon's journey in Albania involved a northward excursion from Scutari "to trespass upon the almost unpoached preserves of Miss Edith Durham, whose memory still lingers here." "In the towns they have made her godmother to some back street, but in the country, even in the none too retentive memories of the everyday people, they still call her "Kralitza" or "The Queen."" Edith Durham travelled extensively in the southern Balkans and had written seven books on Balkan affairs. 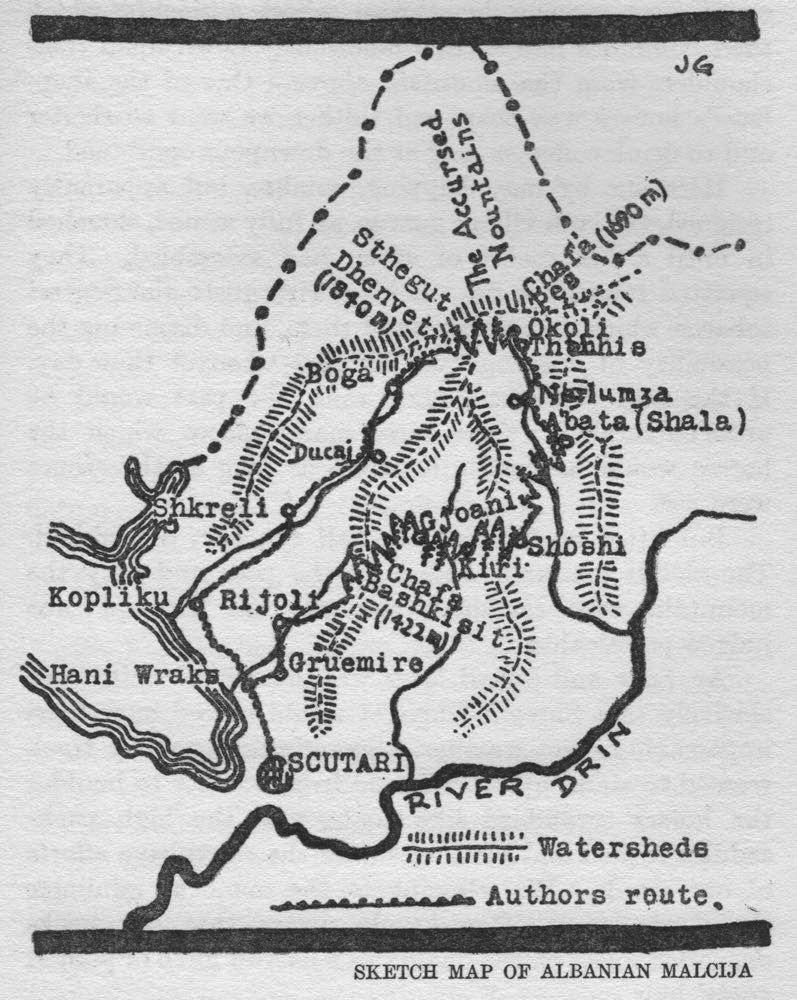 Sketch map of the northern excursion, from "Two Vagabonds in Albania"


Of Scutari, Jan Gordon writes, "A rash statement to make, and yet I venture to make it, is that Scutari, from the point of view of costume, must be the most picturesque and dramatic town in Europe." This proved to be a fertile ground for Cora Gordon's sketching. 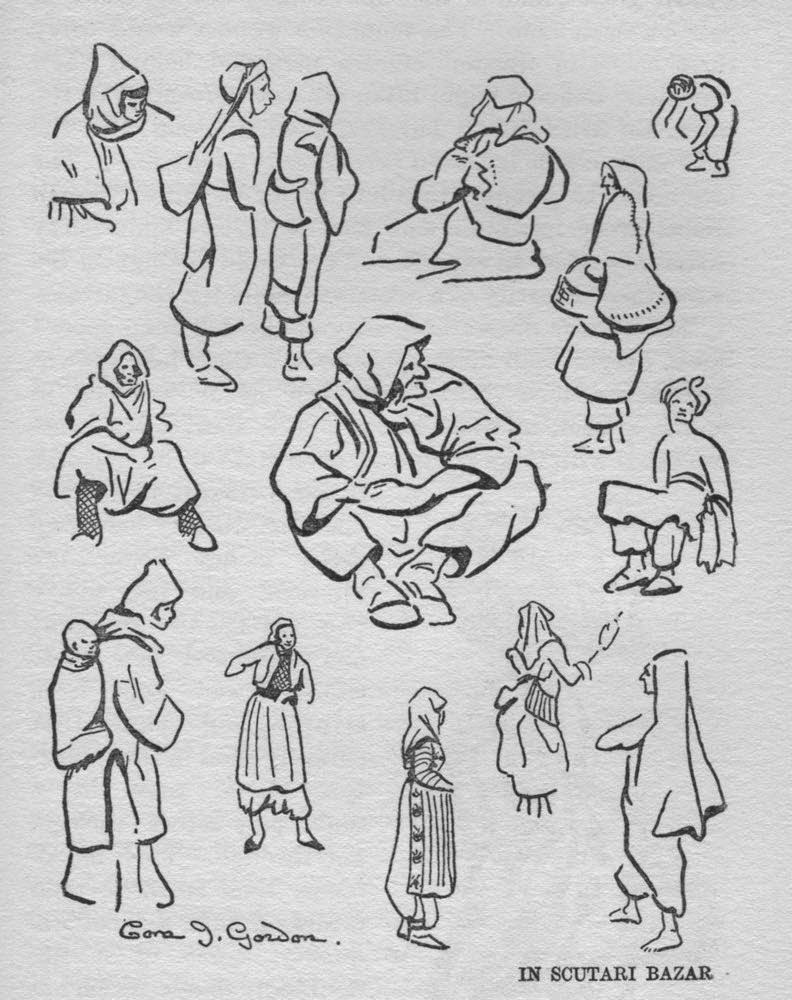 A typical set of Cora Gordon sketches of people in Scutari Bazar.

In Scutari they took on a dragoman for the journey ahead, Nikola, "who turned out to be actually a hairdresser's assistant, and looked exactly like one, with a tall shock of befrizzed hair standing up on his head like that of a Neapolitan dandy of the back streets." 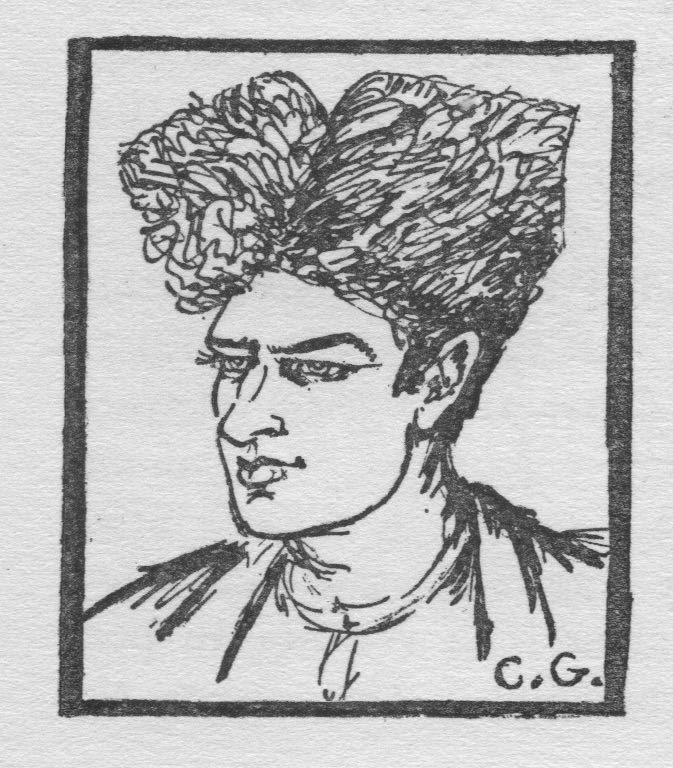 
At one point in the mountains beyond Boga they observed that ".. a lad had occupied a stool near the fire and at once fell into conversation with the women", which was surprising given that they "had seen no man who considered it worth his while to exchange any unnecessary words with the womenfolk." Looking closer they began to doubt the sex of this person and Nikola explained, "That girl .. has vowed never to marry, so she dresses like a man and does man's work."

Young & Twigg (2009) explain the phenomenon, reporting that "In traditional patriarchal society in the southern Balkans, there has long been an option to provide male heirs where none exist: a girl or woman may herself, or her parents - even at birth - declare that she has become male. In these cases the female thenceforth dresses as a boy/man, performs male tasks and mixes socially as a male. With the change she swears virginity and may never revert to her birth gender." There is another relevant account here. 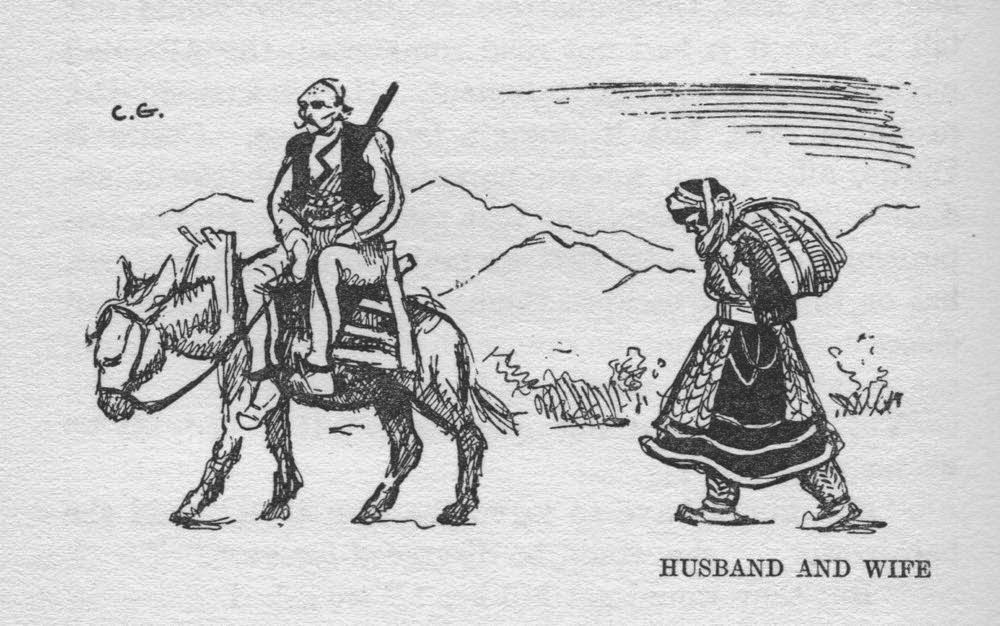 Husband and wife in the Accursed Mountains. 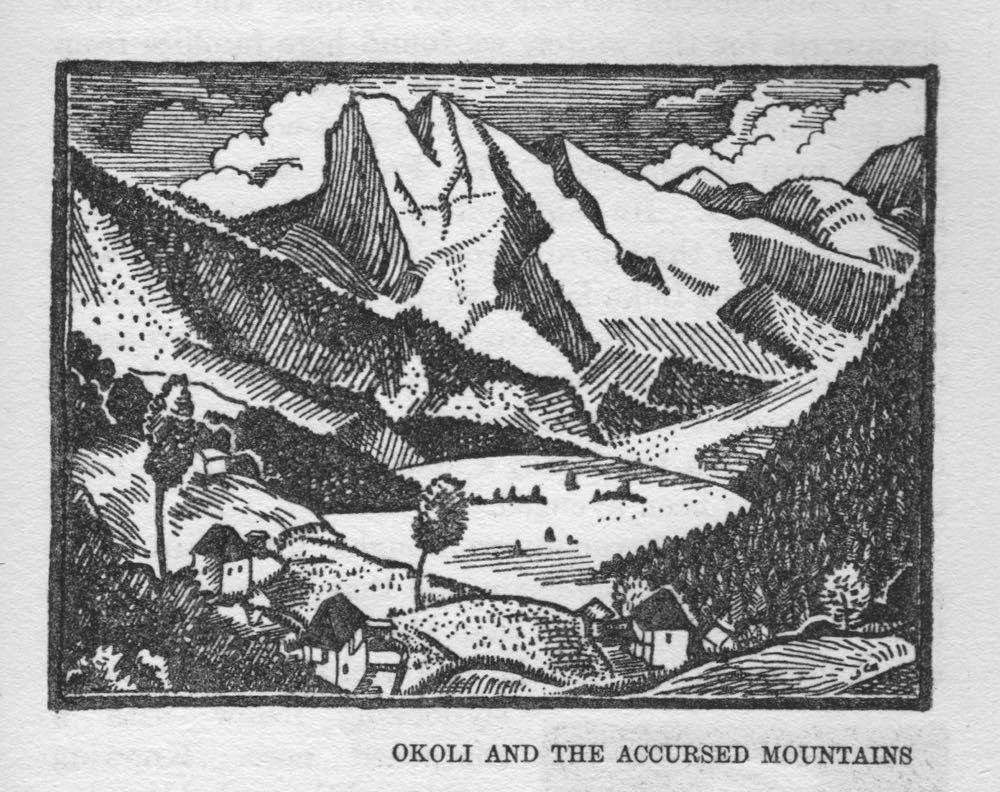 Okoli and the Accursed Mountains. 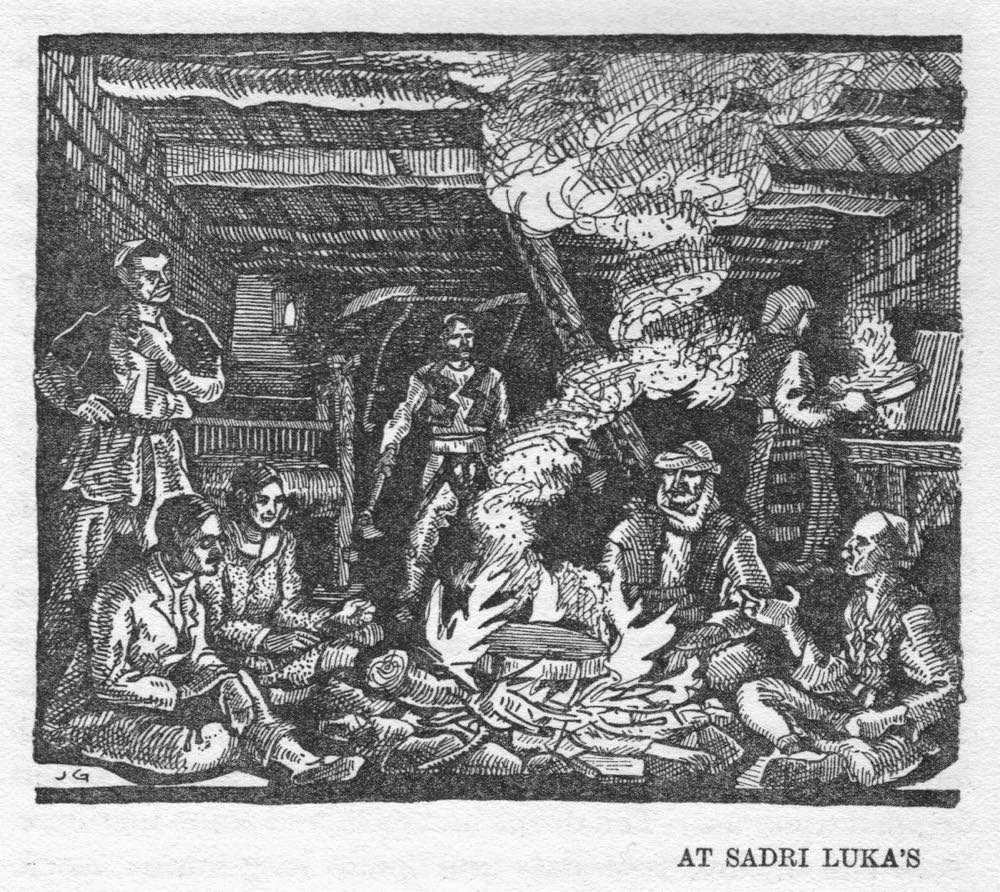 "Lounging round the hot, leaping fire" at Sadri Luka's.


Later, at Sadri Luka's in Okoli "we stayed quite contentedly where we were, lounging round the hot, leaping fire, Jo [Cora] drawing one vivid Albanian head after another, handing her tobacco box about, and insisting so much on the prerogative of the Western woman that she awoke memories of Miss Edith Durham, The Kralitza, or "Queen.""

""Aha, that was indeed a woman!" cried Neij Miraka, the man in the goatskin. "She went about in man's clothes, and I tell you that she was here with us, and over the mountains too, for fourteen days before I as much suspected her sex.""

According to Charles King (2000), Edith Durham "had been well received in the Albanian uplands, and although it was unusual for a woman to travel to the remoter mountain districts, the notion of a lone female wanderer actually fitted with Albanian custom: the tradition of "Albanian virgins" - women who donned men's clothes and held a protected status in tribal society - meant that Durham travelled unmolested."

The Gordons found that memories of Edith Durham and her work on behalf of the Albanians were being rapidly forgotten. "We often had great difficulty in extracting memories of her from the very places that must have known her best." 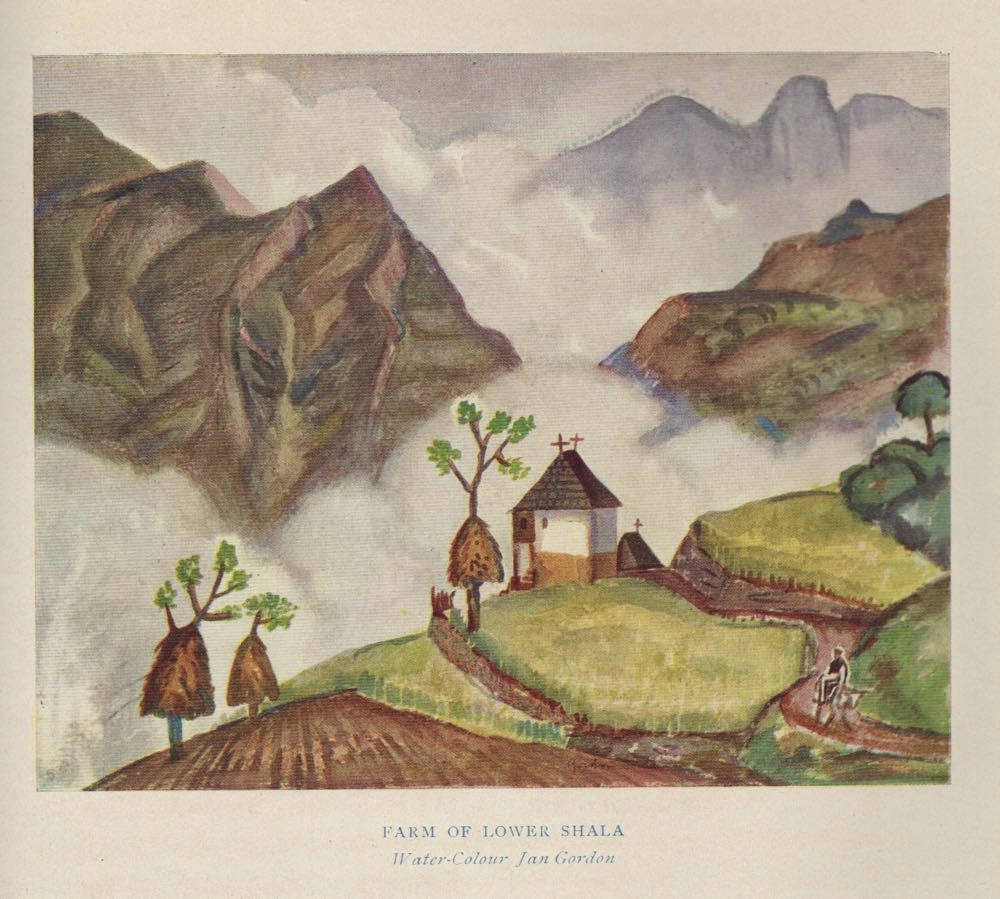 "Farm of Lower Shala", a watercolour by Jan Gordon.