December 19, 2014
Jan and Cora Gordon's first book told the story of the Serbian retreat during 1915. The account of how the book came to be written and published can be read here. They returned to the area the following decade and in 1925 published the story of the journey as "Two Vagabonds in the Balkans." I own a rare copy of this book, complete with its green dust cover. The cover displays the following enticing text:

"Readers of "Poor Folk in Spain" and their other delightful travel-books know Jan and Cora Gordon as the most accomplished and attractive of artist-vagabonds. They do not travel as others do ; they invariably get away from the beaten track and fraternise instinctively with the people. "Two Vagabonds in the Balkans" is an account of their journey through Bosnia, Herzegovina and Montenegro, and gives a vivid and unforgettable picture of that little-known and picturesque part of Europe. The illustrations are as racy and as full of humour as the text."

Original green dust cover of "Two Vagabonds in the Balkans."

The journey out from Paris was by train via Strasburg, Munich and Vienna. In Munich (see) they "discovered a friend of pre-war days, who was still alive because he had been taken by chance to the wrong police bureau, all those who had been led to the other police post having been shot out of hand on the following morning.." During the previous spring they recalled that they had "wandered afoot across the south of Spain carrying our luggage in a small donkey cart" (see The Gordons in Spain).

The Balkans adventure began and ended with gloomy impressions.

Their first moments at Brod station ("technically well within European soil lying west of the longitude of Budapest and north of the latitude of Genoa or Bordeaux"), arriving at midnight, left them with the sensation of arriving "somewhere near to the edge of civilization, or at least of civilization as we would understand it." This first reaction was commented on by Eugene Michail 2011 (The British and the Balkans: Forming Images of Foreign Lands, 1900-1950), accusing the Gordons of hastily judging the level of civilization at Brod "without waiting for any signs of space or time .. All the evidence on which they could base their judgement was the movement of the train. This was enough to give them the knowledge that they had entered a world of otherness." The comment is a little harsh given fact that the Gordons had recorded the lack of any light, the lack of any response to their questions in several languages, the behaviour of their fellow passengers, and the tripping hazard of a squad of soldiers "snoring upon their backs at full length on the platform". They were also surprised to find that there were no porters to help with their collection of art books, bought with the "depreciated coinage of Munich and Austria in 1921", two years' art supplies and some musical instruments. "It was the first time in our lives that we had allowed ourselves to be so lavish in hand luggage." 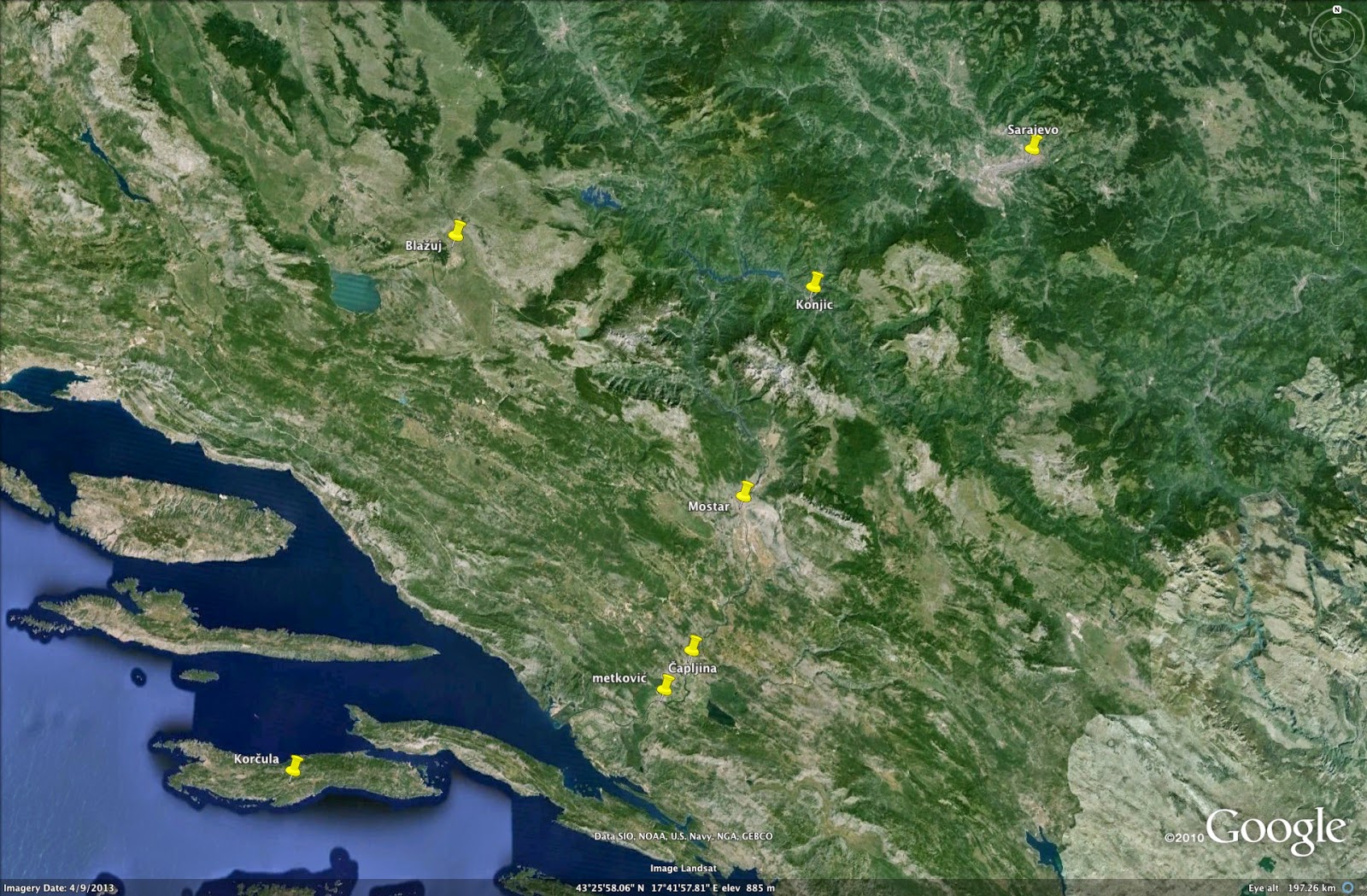 Places visited during the 1922 Balkan journey.


The Gordons travelled from Sarajevo to Metković, "tasting Serbian farms, Moslem villages, and Catholic lodging houses." The image above shows the major places visited on the journey. They encountered interesting people and unappealing food.

".. here in Bosnia one begins to hate the sight of sheep. As often as not the animal is spit-cooked, and the resultant taste is that of tallow combined with another flavour, which makes one recall the infantile joys of sucking a sponge. The consistency of the meat is stringy and gelatinous, and in a moment of super-indigestion we have compared it to that of a doormat upon which a jelly fish has been wiping its feet."
".. everything is cooked in, fried in, and flavoured in mutton fat. The people themselves become stained with and stinking of rancid mutton fat." And so on!

At the end of the trip, feeling some (uncharacteristic) relief at encountering some English ladies at Korčula Bay, the Gordons reflected, "The atmosphere of the Balkans had a curious quality, it had oppressed us now for three months ; it was, we think, looking back upon it, tainted with suspicion, the result of the varied oppressions which one or the other section of the community is forced to suffer. Though the peasant might say, "We don't live two hundred years [a quote from a Pasarić woodcutter], we have not time to quarrel," yet the quarrels of his leaders, the political strife, have stamped what should probably be a genial race with some mute devil of general mistrust."

A sad Serbian soldier and his wife at Korčula Bay complained "You can't get any meat on this island, my brothers ... If there is any, it's so dear that a poor soldier such as I cannot afford it." The Gordons wryly observed that "He was pining for the very Pečena janjetina that we were now hurrying homeward to avoid."