May 30, 2015
The Yorkshire Post and Leeds Intelligencer of Saturday 1st February 1941 made this comment about a new book:

It's interesting seeing Jan and Cora Gordon being used as a reference. The summary of the book prompts a flashback to a visit to the Lugouqiao (Marco Polo) bridge, stretching across a completely dry Yonding River. This is where the Japanese army attacked on the morning of 8 July 1937. 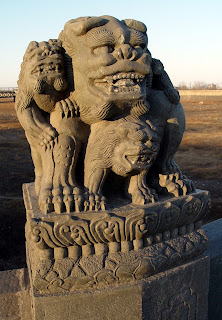