June 10, 2015
The Hull Daily Mail for Friday 14 January 1916 contains a brief note on Jan and Cora Gordon's return from the Balkans:

"Mr and Mrs Jan Gordon have just returned from their adventurous journeys in the Balkans. The last of the British on the road from Karabevo [sic], they were entrusted by Sir Ralph Paget with the charge of the men of military age from the Red Cross Hospital in Serbia and contrived by finding a route hitherto unknown through the Montenegrin highlands to reach the Adriatic. Mrs Gordon herself served in the Montenegrin trenches." 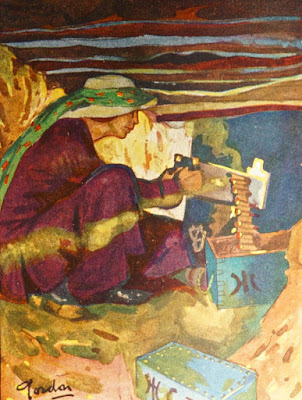 Frontispiece of "The Luck of Thirteen": "He invited Jo to shoot. She squashed past him; there was a knob at the back of the gun on which she pressed her thumbs, and she immediately wanted another pair with which to stop her ears. The gun jammed suddenly. The hero pulled the belt about, and Jo set it going once more." pg. 58, Luck of Thirteen.