"Phrynette's Letters to Lonely Soldiers" 1916 recommends "The Luck of Thirteen"

April 15, 2017
A chatty review of "The Luck of Thirteen" by Marthe Troly-Curtin, appears in her "Phrynette's letters to lonely soldiers" segment in "The Sketch" of April 19th 1916.

She enjoyed "the funny little thumbnail sketches (minute masterpieces by Jo)." and the "rich mine of humour" that they worked with "pen and ink and paint-brush." 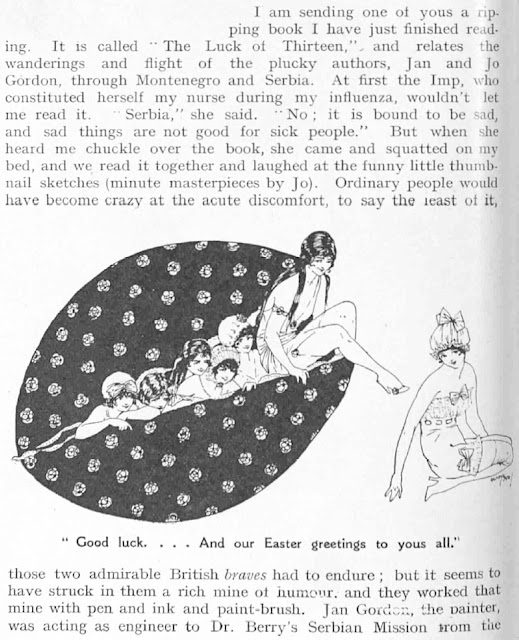 She quotes the observation in the book on the handsome Montenegrin peasanty: "We passed many peasants and had evidently enetered the land of Venus, for each one was more beautiful than the neighbour. Since Jabliak we had not seen an ugly man or woman, and the dignity of their carriage was exceeded only by the nobleness of their features. Ugly women must be valuable in those parts, and probably marry early - humans ever prize the rare above the beautiful." 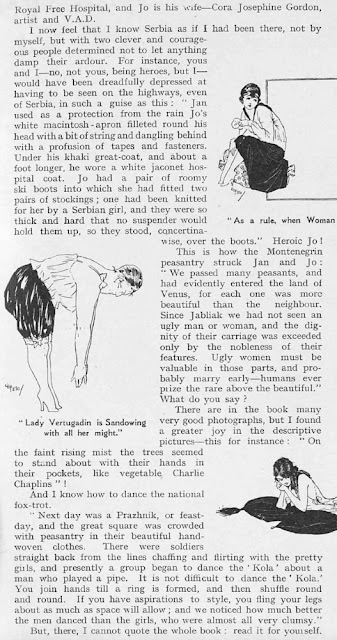 Troly-Curtin also quoted the descriptions of Jan's elaborate protection against the rain and Jo's knitted concertina stockings as well as the scene of dancing on a feast day. She concludes with, "But, there, I cannot quote the whole book : read it for yourself."

For more on books by the Gordons set during WW1, see here.

For more on "Father Berry" in WW1 Serbia, see here.

For more on the "living snake" of the Serbian retreat, see here.

The story of how the book came to be published is told here.