December 09, 2017
The Pall Mall Gazette, Friday 20 October 1922, carried an article on Jan and Cora Gordons' "Poor Folk in Spain." The title was "PAINTING UNDER DIFFICULTIES." The book describes a 1920 journey to Spain by the Gordons. Here is the text of the article.


"There is a delicious irresponsibility about the newest book on Spain, "Poor Folk in Spain," by Jan and Cora Gordon, 12s. 6d.. published by the Bodley Head, and some of the illustrations are funny enough to remind one of Heath Robinson.

The pictures the Gordon have brought back with them to England each have a history. Here are some quotations from the book that will show you some of the difficulties of painting in Spain :

Skirting the fonda wall, I found a corner which seemed secluded, and, sitting down, I began to paint an old woman and her fruit stall. One by one a few people gathered behind me. Blas, the gipsy musician, came up, greeted me, and added his solid presence to the spectators. A baker came out of his shop and watched. The crowd began to increase. Soon they were pressing all round, even in front, so that I could see nothing. "I cannot paint if I cannot see,'' I exclaimed to Blas. He and the baker set themselves one on each side, and hustled an opening in the crowd.

But more and more people hurried up to see what was happening. Soon the crowd, despite the strenuous efforts of Bias and the baker, closed up again in front, and no efforts could keep an open vista.

Jan, who had been drawing in another part of the market, came up. He saw in the midst of a maelstrom of heads the extreme tip of my hat, and worked his way through to speaking distance. Brown-faced old women, with market baskets, men with turkeys hung in braces over their shoulders, young women with babies, gipsy men with tall hats and gig whips, noisy boys, all smiling, friendly, and curious, were peeping under my hat discussing the phenomenon. 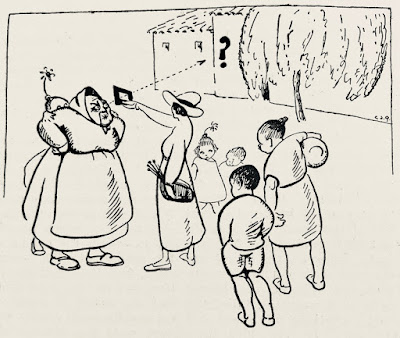 Cora Gordon using the card with a cutout centre for framing. Poor Folks in Spain, page 134.


I use a square hole cut in a piece of cardboard in order to test the view and judge whether it would frame as satisfactorily as it promised to do. Whenever I placed this square to my eye one of my followers bobbed up his head and stared back in one through the hole, trying to fathom the mystery of my act. Once I had begun work, I would become the centre of an excited conversation.

The first strokes of the brush aroused merriment. But often some onlooker astonished me by perceiving the object of my sketch long before the drawing was in any way clear. She (it was generally a she) would then be eager to exhibit her superior knowledge to the others. She would therefore dab her finger on to my painting to point out what she had perceived. This nuisance I fought by covering intrusive fingers with oil paint. By the time the overwise one had cleaned off the paint the drawing would be far advanced enough for the others to see for themselves what I was doing. As soon as I got well into the swing of work questions would begin.


"Why do you do this ? Is it to make picture postcards from? Why isn't your husband with you? Are your father and mother alive? Do you like Spanish food? Have you got any children? If you have no children, as we have too many, would you like a baby to take away with you? Are you doing this for the cinematograph? Do you like painting? How old are you? Why haven't you put in So-and-So's house?" In this case the house in question was usually behind me. 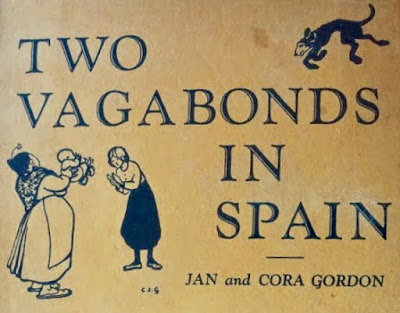 The image of Cora being offered a baby to take away appears on the front cover of the American edition of the book.


These questions. were asked in Murcian Spanish, not very easy to understand with my small lack of acquaintance; and I had to take my attention off my painting in order to find suitable Spanish answers. I tried once not to answer, but my audience then demanded:—
"Are you deaf? Can't you hear? Don't you understand what we say?" All this was said with the most courteous of intentions, direct questioning being permissible in Spain.. Chairs were generally brought out, one for me and others for the spectators."