Jan Gordon: A Step-ladder to Painting

I have read one of these books, "A Step-ladder to Painting", several times (though not for many years), with the idea of learning something about composition (which would also come in handy for photography). 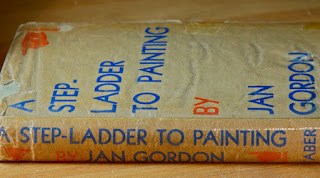 I remember being particularly interested in the discussion of the importance of memory. For example (pg 225), ".. during our trip to Spain all our sketch books and notes were stolen on the railway. Yet we were able to reconstruct Poor Folk in Spain with text and drawings almost entirely from memory, and the book was accepted as accurate even by Spanish critics."

Their memories were not quite as accurate as claimed though and they remembered D. Antonio Gimenez, the Vera guitar-maker, as Don Gomez Fuentes.

One of the things I most like about my battered old copy of this book is that it contains the signatures of Doris I. Ashley Smith (my grandmother), W.D.A. Smith (my father), myself, and those of two of Doris's great grandchildren.