Jan and Cora Gordon and the Balkan Hat: Getting Published in World War I

May 09, 2014
In "The London Roundabout" (1933), Jan Gordon describes how they came to publish their first book, "The Luck of Thirteen" (for an overview of this and their subsequent books visit Jan and Cora Gordon Books).

Following the "famous retreat" from Serbia, they wrote, "Having reached London in rags, and lacking visible means of support, we were trying to capitalize our experiences. The sale of some photographs temporarily banished the wolf, at least round the corner, but to continue the good work Jo had written an article called A Woman's Day at the Montenegrin Front." 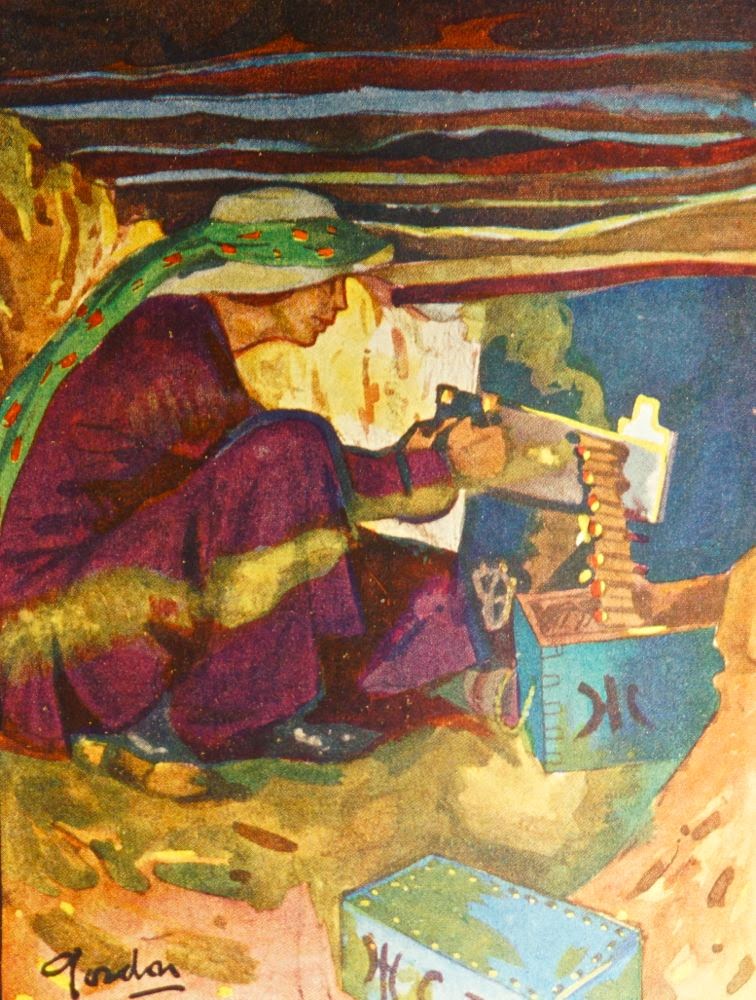 "JO AT THE MACHINE GUN"

A friend sent them to see Dan Rider, who recommended they send it to the Westminster Gazette - "They'll eat it." "Eat it they did, and spewed it out again as print. From this manuscript and a few others grew our first travel-book."

On showing sketches of Serbia to Cecil Chesterton, editor of the New Witness (for which magazine Jan Gordon later wrote art criticism under the name of "John Salis") he suggested that they make a book from their materials, saying, "Go to Chapman and Hall, suggest the idea to them, and say I sent you."

A confused Jan Gordon accidentally visited the offices of Smith, Elder & Co. instead and made their proposal to a surprised Reginald Smith. He responded: "Am I to gather that, never having written a book before, you wish to induce me to agree to publish a book not a word of which is yet written? Well, there is one thing I must admire in you - your cheek. Why not write the book and then bring it?"

The Gordons explained their financial state "and the impossibility of spending time on a purely speculative undertaking." Smith asked for the articles and drawings to be left with him as he considered and, before they left, asked Cora Gordon about her hat, which she had assembled from various ingredients encountered in the Balkans. The next day Smith agreed to sign the agreement and added, "for goodness' sake, please write the book as like that hat as possible."

"Never have a we received a better or more compact piece of advice, for that hat, containing local colour, costume, peasant crafts, poverty, human interest, and the picaresque, had been put together with imagination and taste" and this was the start of the Gordons' literary career.