Jan and Cora Gordon and a Donkey

May 04, 2014
The journey described in "Misadventures with a Donkey in Spain" (1924) by Jan and Cora Gordon began with a search for a donkey to pull a cart containing their art materials. By the end of the journey they had "left a trail of 500 kilometres of perplexity across the provinces of Murcia, Almeria, Granada, and Malaga .."

In the summer of 2009 we followed in the footsteps of Cora, Jan and Colonel Geraldine the donkey (the story can be found here). We stayed in Vera, where an ancient and unusual guitar owned by the Gordons had been made in 1854 (more on the guitars can be found here and here). The grandson of Jan Gordon's godson can be seen studying a modern guitar in a Vera shop window here. 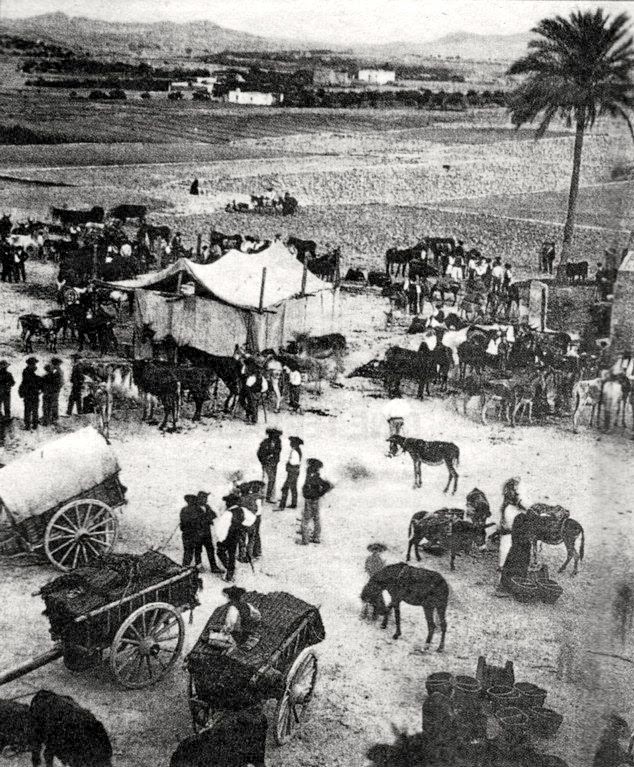 During our stay in Vera we visited a temporary exhibition (in the Convento de la Victoria) of ancient photographs and found one evocative connection with the Gordons' Spanish journey. It shows a donkey fair of the 1920s, with three donkey carts visible, including a covered one very like that used by the Gordons. A group of panniers can be seen in the foreground and a good number of donkeys are available for inspection.

Many adventures later, arriving in Malaga at the end of their journey, the Gordons struggled to sell Colonel Geraldine and the cart; "It would have been easy to dispose of the donkey alone; several persons offered us the same price that we had paid for it .. but the cart was unwanted. It was not a Malagan cart, but a Murcian model."

Eventually "another gypsy was found, who offered us thirty-five duros, and we were now so tired of the business that the poor little Colonel was handed over to a group of very delighted speculators. We gave him a large feed of alfalfa grass, and as a last treat a whole orange. His days of splendour were over" and "Jo turned away to hide a tear."