Jan and Cora Gordon in Ghent

May 10, 2014
Jan Gordon, under his pseudonym of Salis, tells the story of the "first real exhibition" of art put on by Jan and Cora Gordon, in pre-WW1 days (GRADUS AD ... MONTPARNASSUM, Blackwood's, March 1929).

A German friend (married to an American wife despite them having no language in common) had booked for an exhibition in Ghent and "was looking for a confrère, one who would share with him the expenses of the gallery and yet not be a serious rival." He "inflamed our ambition, described Belgium as a country clamouring for art, and pointed out that painting pictures and selling them were two very different branches of the profession, and that it was time we learned the latter." 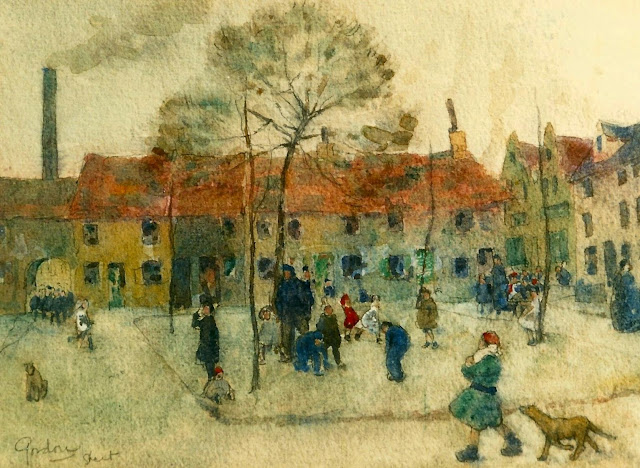 We have a single painting in the family dating from that visit to Ghent. It shows a square with a number of trees, mostly without leaves. In the background is a smoking industrial chimney. A girl walks past in the foreground, carrying a small white animal and accompanied by her dog. Children are playing in the central part of the square, accompanied by a man. A group of workmen emerges from the direction of the factory. The figures are warmly dressed against the cold. Two houses with tall Flemish gables are visible beyond the far right hand corner of the square.

At this Ghent exhibition, Jan and Cora Gordon learned that "the pictures once painted, the artist has, in the expressive American phrase, to sell himself." Their German friend "had two kinds of pictures, those he did for reputation and those he did for commerce; but in selling he seemed to have a sardonic zest in spilling more soul over the sale of one pot-boiler than over that of two of his genuine works.."