February 04, 2018
The Pall Mall Gazette of Thursday 12th October 1922 has a cheerful small segment (in GOSSIP - GRAVE AND GAY By JOHANNA) on Jan and Cora Gordon under the heading of "Two Happy Vagabonds".

"Those two inveterate roamers round the world Jan and Cora Gordon. have been tramping in Spain again with an easel and a paint box and next week Bodley Head, Limited, are bringing out the remit in the shape of a book about their experiences, illustrated by sketches by both of them. I'm looking forward to reading this, as the Gordons are among the few real Bohemians left to us. They have some attics in Bloomsbury and a studio in Paris, and, I rather think, a pied à terre in Prague. You never know where they are, but whenever they turn up everyone is delighted to see them."

I have not come across any other references to a pied à terre in Prague, but perhaps Johanna was thinking of Munich?

Later that month of October, the Pall Mall Gazette carried an article about the Gordons' "Poor Folks in Spain" which was based on their 1920 journey to southern Spain, under the title "Painting under Difficulties". 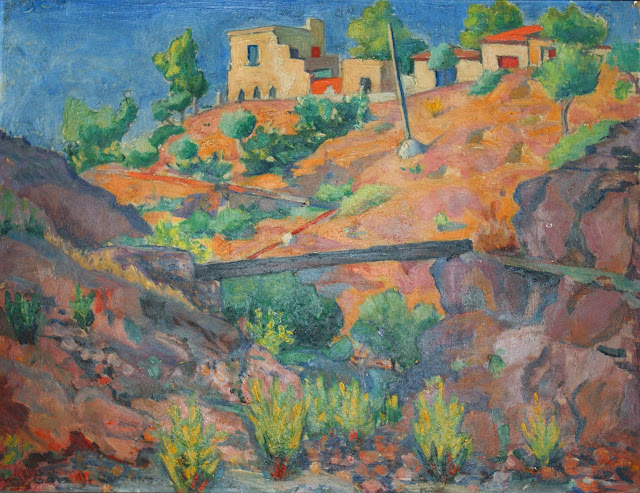 A painting of a view in southern Spain by Cora gordon