The war was over, they had re-established themselves as artists in Paris (though retaining attics in Bloomsbury), and planned a lengthy expedition to sunny southern Europe. Their five month excursion to Spain produced many works of art and a book, "Poor Folk in Spain," initiating the "Two Vagabonds" series which made them famous.

Cora Gordon wrote, "Jan had conceived a passion for the Spanish guitar during the war and was determined to sample the music of this instrument at source .." and visit Spain they then did. The book relates numerous amusing incidents from their time there.

An exhibition of the paintings produced during the time in Spain took place at the Burlington Gallery at the beginning of 1921.

One specific guitar figured strongly in the book. "I have an old guitar. It is a unique instrument, none other like it has ever been seen in Spain" said the man who sold the guitar to Jan (Poor Folks in Spain, pg. 233). "The guitar was of a strange form and with a scrolled head, the curve of its shape having some of the beauty to be found in negro sculpture" (pg. 238).

For me personally, the book represents a strong connection with the Gordons. As a child, I heard stories about the Gordons and Spanish guitars related to their Spanish journeys. In 2009, following the death of my mother, I took the family on a trip to southern Spain to retrace some of the steps taken by the Gordons. The household also contains two guitar players.

The Times (October 13, 1922) contains a note on the impending release of the book,
"Poor Folk in Spain, by Jan and Cora Gordon, which Messrs. John Lane have nearly ready, contains the unconventional record of a vagabond journey made by two artists, who, feeling an imperative need of escape to some sunny place where the war had not been, were finally decided by an exhibition of Spanish landscapes by Wyndham Tryon. Their narrative is not a book about Spain in the ordinary sense of the word : it is a book about themselves, with Spanish peasants and villages in the background, and reproductions from their own sketches."

In addition to travelling and painting, Jan was busy writing art criticism, such as his commentary on sculpture by Jacob Epstein. He also gave public talks on Modern Art.

Jan Gordon's own wartime art was also reviewed by others, such as the discussion by Ezra Pound.

Both Jan and Cora published images from Cornwall, Jan his "Small Coast Town" painting in Colour magazine, and Cora a woodcut of Sennen Cove in The Apple (we visited the area in 2014).

A highly productive year, 1920 set them up for the decade ahead, filled with travels, all to be recorded in paintings and a successful series of engaging books. 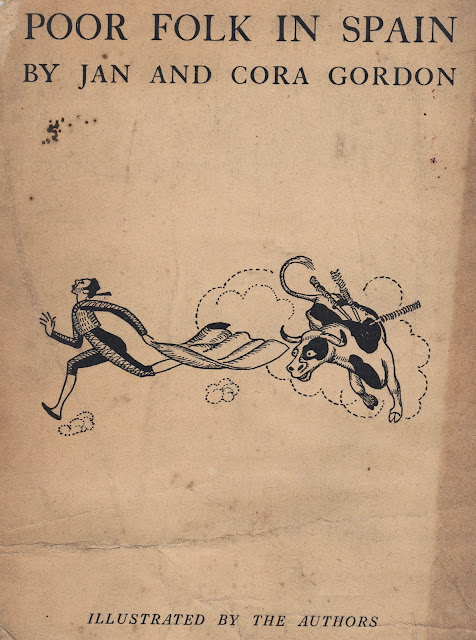 Dust jacket of the first edition of Poor Folk in Spain. The image represents the "taunting of the unwilling bull" in a Murcian bullfight (pg 101). "The toreros flapped their faded cloaks at it, but whenever the bull was tempted to charge the man ran for safety and crammed himself through one of the bolt-holes in the palisade."

Jan and Cora Gordon, Pictures of Southern Spain at the Burlington Gallery 1921
March 07, 2015