Cora Gordon at the Paintings by British Women Exhibition, Tamworth 1949

I came across an interesting account of Cora Gordon's participation at an exhibition in the Norman Castle at Tamworth, Staffordshire.

The Tamworth Herald of Saturday 16th July 1949 had the following to say:

"Under the general title "Paintings by British Women," the Arts Council of Great Britain has on tour a selection of pictures from the recent exhibition held by the Women's International Art Club and it is in recognition of Tamworth's place as a centre of art interest that this collection is to be received on loan here and will be on view in the Castle Museum art gallery for a fortnight commencing on Sunday. The pictures, originally shown in the R.B.A. Galleries, London, were chosen in consultation with the chairman of the Women's International Art Club (Mrs. Beryl Sinclair), and the exhibition, we are told, provides a welcome opportunity of showing the public in provincial centres the work of contemporary women painters. Miss Cora Gordon is to open the exhibition at an invitation viewing on Saturday afternoon."

The following report appeared in the same paper on the 23rd July:

"As part of the Tamworth Town Council s policy of developing the use and interest of the Castle, a fortnight's exhibition of the work of contemporary British women painters was opened there on Saturday. The pictures, on tour by The Arts Council of Great Britain, are a selection from this year's exhibition of the Women's International Art Club held recently in London.

Councillor Bithell (chairman of the Library and Museum Committee), who presided, said the exhibition was one of value and purpose in the life of the community and they were delighted to have this opportunity of displaying it within their ancient Castle.

"It is our belief in this borough," he went on, "that the things which really count are not the things which are transitory but those which are lasting and for all time. Art belongs to that sphere life, a sphere which determines and establishes the rules of goodness, truth and beauty." The arts did represent an international language that everyone could, if they so willed, understand, without any barriers of colour, creed or political philosophy.

He spoke not only for the Committee but for the Town Council when he said it was their intention, as far as lay in their power, to make available to the people of Tamworth, and of a wider area beyond the borough, a conception of this international way of life that would be of benefit to all. The Committee hoped in the future to broaden their activities, to get more light into the Castle, to heat it and to improve its scope and usefulness in every possible way.

That was a memorable occasion. The first opportunity they had had of throwing open the gallery in that way and displaying in it pictures of that kind. He hoped many people would take the opportunity of seeing them during the period the exhibition.

Councillor Bithell paid tribute to the co-operation received from the Arts Council and Miss Davidson, particularly in the extreme kindness which she had shown in arranging for the display and the hanging of the pictures. He also expressed appreciation of the work of the Tamworth Arts and Science Club in keeping alive a love of the arts. It was the desire of the Town Council to give what help they could to this and movements with a kindred aim.

Introduced by Councillor Bithell as an artist, literatist, traveller, musician and lecturer, Cora Gordon declared the exhibition open. "'We welcome you not only for yourself but for the things for which you stand," remarked the Chairman.

Pointing out that the 25 pictures on view had been specially chosen from the exhibition of the Women's International Art Club, Mrs. Gordon said she thought this idea of sending round good pictures, selected by someone who really did know, was one of the most helpful things she had ever heard of. There were people who said "I do hope you don't like those awful modern pictures." To meet that outlook, talking was not really the most useful thing. Looking, becoming accustomed to things, was what really appealed to our feelings. Talking only appealed to one's logic and mental capacity. They could only understand the kind of work that was within their perception but they could learn to see.

She spoke of her own first impressions, when a student of the pictures of Matisse and Picasso. "I didn't fight the pictures. If one is absolutely puzzled by anything the best thing is to gape at it and leave it alone without saying anything. I began to realise I had been studying too long at the schools and had better see things that other people were doing. I came to see there was something beautiful in them and I could not think why. Many books are written to try and explain these things but I found in the end I got a double sense of enjoyment. I could enjoy the old masters and I was able to enjoy these new pictures as far as a young student could."

The pictures they were looking at that afternoon were definitely on the modern, side compared with those to which the older people present had been accustomed. Why should people lose a love of anything that was good? They all tended to get things out of perspective, to give their minds to a particular kind of art or music to the exclusion of anything else. Not only were these pictures beautiful to look at but it was worth anybody's while to stand for quite a time in front of each and try to get something out of it." The more things we can understand in this life the better we become."

Proposing a vote of thanks to the opener, the Mayor of Tamworth said the Town Council were giving their wholehearted support to the development of the arts and to the work of the Arts Council and of local organisations. He hoped the people of Tamworth and district would give the exhibition and also the work of these organisations the encouragement of their full support.

Following the opening, the guests were entertained to tea." 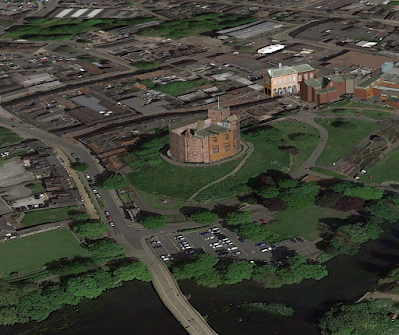