September 25, 2015
I just came across a lengthy article about Jan and Cora Gordon's return to London, in the Yorkshire Evening Post of Monday 9th October 1933.

"Some people always seem to be having adventures, even when, outwardly, their lives are not greatly different from their neighbours. Jan and Cora Gordon are that sort of people. They have had adventures - and written about them - in several parts of Europe, and in America, too, whereby came their famous book, "Star Dust in Hollywood."

Anyone, you might say, could write entertainingly about out-of-the-way places and odd experiences, but now, in "The London Roundabout" (Harrap, 10s. 6d. net), one finds Mr. and Mrs. Gordon finding gems amid unpromising dust, writing and sketching just as entertainingly, and with just the same knack of spotting essentials, and ranging wittily from the particular to the general and back again.

Besides which, they have lived so long and so variously abroad that their occasionally candid criticism of London, and of England generally, carries weight. If they approve, it is not for nothing; if sometimes they write in a fashion to jar English self-complacency, that also is not for nothing.

Presumably the Gordons have met many dull people, but one would scarcely think so. Charwomen, vacuum cleaner salesmen, gas-fitters, people shopping, second-hand dealers, it is all the same to them; there is always some unexpected characteristic to be spotted. Yet the secret is simple enough.

This couple are intensely interested in people, as well as in places, customs, pictures, architecture, cookery, politics, what you will. They are the perfect onlookers, constantly happening upon ideas that it seems never to have occurred to anyone else to mention.

They begin the book with a farewell to Paris, where they have made their home for many years [there is a delightful account of their life in Paris here], and a removal to London [this is where they moved to]. It is a homecoming, but:
'Coming into any capital city is like entering a great hotel by means of the sewers. London makes no attempt to seem other than she is, a human agglomeration, so smoke-stained and mud-begrimed that the man of the future will be astonished that we had any claim to be thought civilised at all ... For all our boasted cleanliness, we are content with a capital the face-filth and ugliness of which are unsurpassed by any other capital in the world, and which has been equalled only in other cities of our building such as Birmingham or Liverpool. ... There is a sense of character, shape and pride in even the poorest streets of Paris. But the mean streets of London are characterless.'

Here is another sweeping but perfectly true observation on the social difficulties of London for people of limited means:
'The economical obstacle puts a stopper on a full half of the promising acquaintanceships offered in London. Fares are the bogey of the wage-earner. If we invite Mr. and Mrs. Jones to dinner, and Mr. Jones returns the compliment, the housekeeping account is therefore balanced. But if it is going to cost the Joneses four shillings to dine with us, and it is going to cost us four bob to dine back with the Joneses, we do have to begin to tot up whether the extra skill of Mrs. Jones's cook, Mr. Jones's taste in wine, the Joneses' family wit and the Joneses' intermittent friendship is really worth four bob a go. ... In this way, London is hampering and ruinous.'

All the same, to tour London with the Gordons is worth while. Oxford Street, for instance, and its shops: 'Picadilly or Regent Street may be more fashionable, but they are not as important.' But:-
'If the fifty best buildings in the world were to be selected, would a single complete London building find a place among them" We doubt it. If the fifty best bridges of the world had to be picked, would one of them be a London bridge? Assuredly not. Among the ten finest river frontages, would London's be counted? Hardly .... What then, has London? It has what everything English has, atmosphere.'

There are nudist colonies in or near London, and the Gordons, with their knack of going everywhere, secured admission to a camp meeting. The nudists appear to have been a miscellaneous lot, spending the week-end in a wood, among them office workers male and female, a young Jewish furniture maker, an elderly ex-policeman, a doctor and his daughter, and several Civil Servants:-
'Nudism taken neat, is as earnest a creed, and as dogmatic, as Christian Science. Its motto is mens sana in corpore sano ... Strip the body to the buff, and two-thirds of its sexual appeal fades away. It is indeed, strange that the moralists have not yet understood this fact. Blinding themselves by the old-aged conceptions, they clamour against the indecency of the exposed body, whereas to the normal common sense, the chief argument against nudism is its appalling decency .... But from our personal outlook, too much time, energy and care seem to be spent in the mere act of being naked. As outsiders looking on, we felt that the efforts of the members seemed directed to building up a fictitious naturalism under conditions which were far from being natural.' That, however, was an out-of-the-way experience, even for London.

For the rest, the book is packed with delightful scenic and atmospheric descriptions and snatches of character sketch. It touches on an old Bailey trial, and includes a first rate description of an evening behind the scenes during the London Hippodrome pantomime of last season.

It is stimulating and racy, and obviously the Gordons can go on drawing and describing for us as long as they choose to live in London. After 350 pages, they mention a string of subjects they thought of mentioning, but had to leave out. [one of these related to the story of the Master Fiddler of Sweden and the Smiths] They must resume.

Meanwhile, "The London Roundabout" ought to go down on the list of books that one buys to keep, and again to give away. 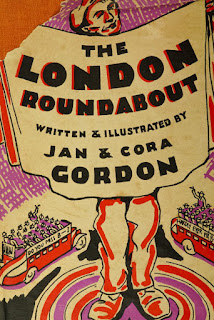