Jan Gordon's "Painting for Beginners" and the connection with Marion Milner

September 21, 2015
I own several copies of Jan Gordon's "Step-ladder to Painting", including one treasured copy with the autographs of four generations of family in it. I have previously written on "The Fountain Pen" section and a discussion on capturing emotion in art.

I received today a copy of the American edition of this book, "Painting for Beginners" in its 1946 Reprint Edition.

"To
DENNIS AND MARION MILNER
who so enthusiastically acted
as the "dogs" on whom many of these suggestions were tried."

Marion Milner mentioned the Gordons in the book "Bothered by Alligators" (2012):

"In Los Angeles, instead of studying delinquents we met two English painters, Jan and Cora Gordon (Jan was subsequently to become art critic to The Observer in London). We spent much time with them. Later Jan was to publish a book called A Step Ladder to Painting which he dedicated to both of us as the guinea pigs on whom he had tried out his ideas. What he said about outline in painting inspired me to make a drawing of two jugs (see my book On Not Being Able to Paint). The overlap of their two shapes gradually led me, over the years, to develop the symbol of two overlapping circles which was to become central to my thinking about concentration, reverie and creativity." 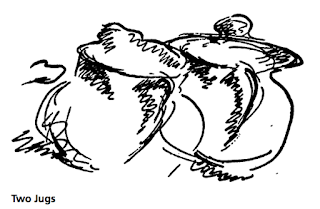 
This was a delightful surprise, since, having written about the Gordons for many years (there are more than 130 articles here, including an abundance of original research), I had not come across this connection before.

I now see that the friendship between Milner and the Gordons is also mentioned in "Marion Milner: The Life" (2013) by Emma Letley. Milner also refers to the Gordons in her book "On Not Being Able to Paint" (1950). On problems of composition, she quotes Jan Gordon as follows:
“Looking at any single object the spectator is easily able to decide; ‘Yes, that is a nice shape’ (or ugly shape as the case may be). In selecting another object he can also decide; ‘This, too, has a nice shape.’ But here comes the test of the artistic vision. In placing the two objects together in a group is he able to decide whether the group-shape is also nice?”
She also quotes Cora Gordon, as follows: “Those harmonic qualities which to some extent painting shares with music enter, as yet, very little into or perhaps even have been lost from the awareness of the ordinary man.”

There is a note from the publisher in "Painting for Beginners" to say, "With the gracious consent of Mr. Gordon, the American edition of this work, presented here, has been arranged and edited by the eminent American painter, Mr. Jacob Getlar Smith." The book has a very friendly organisation, in three parts, these being "First suggestions", "Second suggestions" and "Some field-work suggestions". Given a quiet moment or two I will give this book another read and enjoy it once again.