The newspaper introduced the article with, "European visitors view the resort as a happy babel where our new citizens from far lands romp on the sand, revel in the mechanical thrills and chatter in their native tongues."

"Rollicking Coney Island, now ready to meet the Summer multitudes with new frills and thrills, is always a source of wonder to the visitor from overseas. In the following article two English artists who have been 'motor vagabonds' in many countries set forth their impressions of this truly American playground." 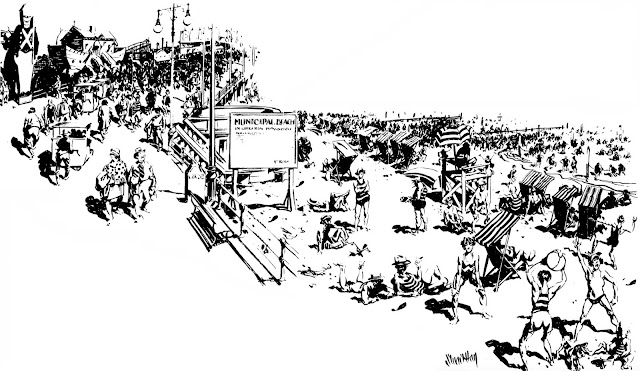 
Much of the text of the article is later reused in "On Wandering Wheels" (1929), including the account of the German "professional wild man", who, as a supper companion of the Gordons and their friends at the "Künstlerpension Fürmann" one evening, found his family values offended by that German Bohemia; "the mountebank was shocked."

An article in the Pittsburgh Post Gazette for December 4th, 1927. "Shocks in Modern Art Used Up, Painter Says" mentions that "Among their exploits was entertaining an Arabian side show at Coney Island with lightening artist sketches and with their guitars."