March 16, 2016
The New York Times of November 27th 1927, carries an article on a show at the New York Weyhe Galleries by Jan and Cora Gordon.

"Jan Gordon and his wife, Cora J. Gordon, have spent several months in this country, 'vagabonding'; and now they have come to New York to exhibit some of their pictures at the Weyhe Galleries. Mr. Gordon's book on modern French painting is well known, and the two English artists have collaborated, besides, in writing several delightful books of travel, illustrated with work done along the way.

While a few of the pictures shown here were painted in this country (notably some farm scenes), most of them take the spectator further afield, to Albania, Portugal and Southern Spain. These studies bring one into close and delightfully informal contact with places that cease to be aloof or strange. The travelers never enter with fanfare, through a prepared front door. They prefer to slip into a place quite simply, quite humbly, and, from the beginning, strive to live the life that is all about them. The rewards are sterling; for they carry off in their bags and portfolios human and authentic documents.

These records are valuable for this reason and because of the technique that has figured in their creation. This technique, consonant with the spirit of the artists themselves, goes modestly about its business, never asserting authority, merely playing its part, and, that played, seeking no applause.

Among the things shown at the Weyhe Galleries are some admirable pencil drawings by Mrs. Gordon. They would appear to have been done on yellow paper, but it develops that instead this effect was achieved by the use of poppy oil, applied after the study had been set down. This oil soaks into the white paper, giving it an old-golden hue, at the same time fixing the pencil line.

Talking with Mr. and Mrs. Gordon about their experiences and hearing them play Spanish music on native instruments in a way that gives to such music a significance never felt before, one thus privileged realizes again how fully they have caught the soul of peoples and of localities; why their pictures weave so close a texture of common life. For if in life many forms of expression have their place, so painting that is really true in its appeal can hardly fail to give on a sense of this manifold expression.

The exhibition opens tomorrow and remains until Dec. 5."


There is a delightful image of this gallery at the time, an ink on paper lithograph commissioned as a Christmas card for the gallery. 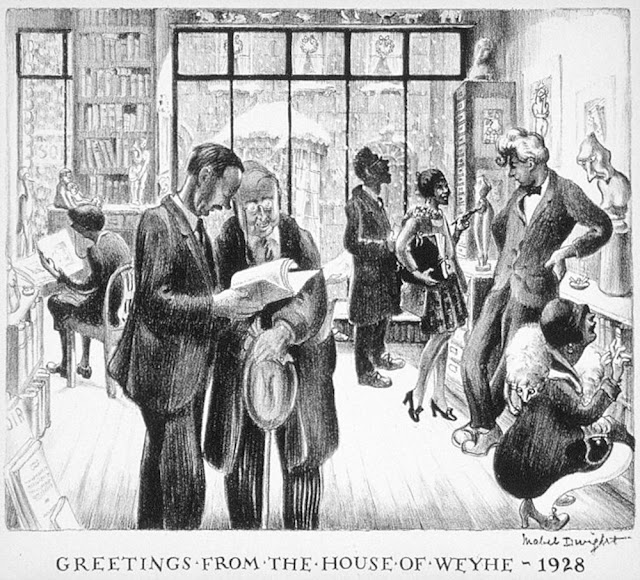