March 17, 2016
In her segment on "Activities in London" in The New York Times of December 18, 1932, Ruth Green Harris writes the following comments on English contemporary art, the quality of Cora Gordon's drawings and the book for art students being written by Jan Gordon.

"It seems to me the English artist is at his best when he does brilliant character drawings. They are too full of character to be called caricature. Here craftsmanship is used to a beautiful end, for the artist has reached beyond the technical business, has recovered from the art school, and can buckle down to his - art.

Cora Gordon's drawings, for instance. She never stops drawing with a command that cannot be translated into any other medium. You look at a a head and say to yourself it is such and such. But it isn't. There is no right word because she has used just the right line. And this cunning is English. Perhaps a Frenchman does not leave himself so completely out of the subject.

These drawings are not to hang on walls, they are not part of the furniture of a room. They belong in your hand, to be gloated over; or they belong in the pages of Punch. Unfortunately, this sort of thing does not get itself into the 'funnies' often enough. There is never any need of a caption.

Jan Gordon (everyone knows his 'Modern French Painting') has started a book for English students. Light heartedly he is writing about the serious business of learning. The book is full of all sorts of devices. The devices are only suggestions. If the student finds better ones, let him go ahead and use them.

I have seen only the synopsis and a page or two of the first chapter. One does not feel that Gordon is advising a short-cut but rather a change of stress. Indeed, if you were to follow his directions you would be doing nothing but work all the time. Eating and drinking and sleeping art. There is no royal road. But the stress is laid on getting over studentship and craftsman ship and proceeding to more important matters p not as easily, but as unsolemnly as possible. He is not evading the fact that scales must be practiced, but that there is no heavyweight importance to scales in themselves - though one should never stop practicing.

The first chapter might have been written especially for the English artist, and may have been inspired by his wife's brilliant drawings, of which I spoke a moment ago. He points out that color and value constitute an approximation of nature. But an outline does not exist in nature and is therefore the purer abstraction and a greater tax on the imagination of the artist. He clears up the fallacy that the Egyptian inscribed an outline on stone because he could not make a 'realistic' painting. Indeed, his portraits bear witness that the Egyptian could be a great painter when he chose.

Perhaps abstract, characterful outline is the genius of English art, though Jan Gordon does not say so in his book." 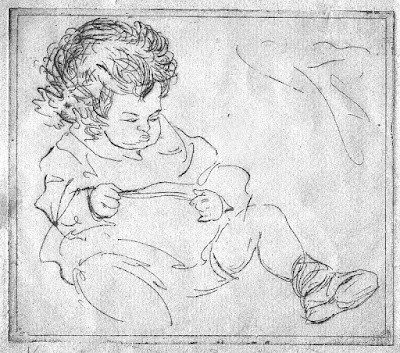 
Examples of Cora Gordon's drawings can be seen here: Cora Josephine Gordon Artworks. She published early drawings in The Idler and Coterie, and The Studio Magazine. She was well known for rapid sketches from life in Hyde Park Corner.

The book mentioned in the article was eventually published as "A Stepladder to Painting" (1934).