April 21, 2014
The handwriting of those long gone can provide an evocative connection with their times.

See for example this copy of "Two Vagabonds in Spain" with the signature of Lady Ottoline Morrell, or this signed copy of "Good Meals for Hard Times" by Doris I. Smith. A copy of "A Step-ladder to Painting" has the signatures of four generations of Smiths.

I have one copy of "The London Roundabout" by Jan and Cora Gordon with a dedication written in ink on the title page. 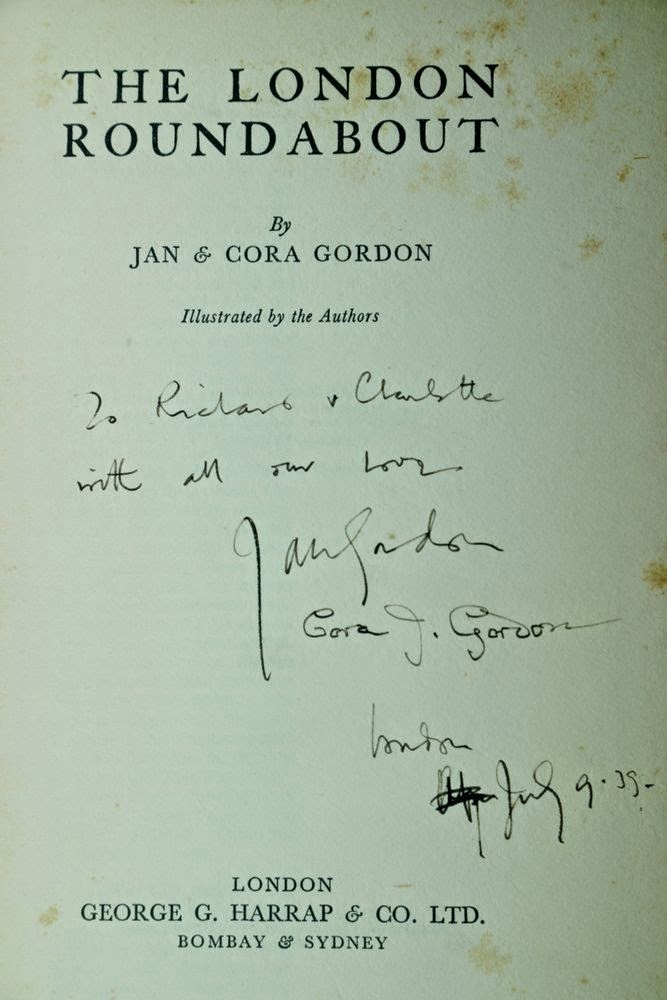 It reads, "To Richard & Charlotte with all our love
Jan Gordon
Cora J. Gordon
London
July 9. 35."

Richard and Charlotte Perry were American friends (though Charlotte had immigrated from England in 1921). They had hosted the Gordons at the beginning of their 1927 USA journey:

"We hardly expected, bustling off the train into the arms of our welcoming friends and hosts, Richard and Charlotte, to plunge straight into such an atmosphere of Nathaniel Hawthorne, only an hour's ride away from New York City." "On Wandering Wheels", page 17.

Richard Perry, who worked in manufacturing and import-export businesses, had volounteered with the YMCA in England from December 1917 to February 1919.

Cora Gordon's signature is far tidier than Jan's and this reminds me of a comment by their Godson (my father): "To my mind Jan's great forte was bold movement and deliberate exaggeration rather than precision. Jo was the naturally more precise draughtsman."