Jan and Cora Gordon in Paris: "We Like to Work Till Four O'Clock"

February 07, 2015
Myron Chester Nutting's wonderful reminiscences of his time as an artist in Paris during the 1920s include a charming anecdote about afternoon tea with Jan and Cora Gordon.

The Gordons had painted a sign which they hung on their door: "We Like to Work Till Four O'Clock." "After that, they were very sociable people—they liked to have their friends in—so after four, you could drop around and be sure of a welcome."

Nutting describes a unique and amusing afternoon with the Gordons, involving a nearly unintelligible writer, a partial building collapse and a "banshee":

"It was after four, and in the English custom, they had the tea table set up. A few friends of theirs were there, and Cora introduced me to a writer (I think he was a Bulgarian). She thought he was quite an important talent. Some work of his was going to be produced in Paris. So I sat down next to him, and he was very talkative, and in his speech, he got along quite well. Apparently, he knew English very well, but his accent was rather difficult. But with close attention, we got along very nicely indeed. He was a very interesting man, and we discussed all sorts of things.

Then, all of a sudden, he was saying something about one of his plays, and he reached into his inside coat pocket and pulled out a manuscript. He said, "I have something here that will illustrate what I mean. I will read to you this scene from this play of mine." So I was pleased to hear a sample of his dramatic writing. He started to read, and—well, it's no exaggeration—if that man had been speaking his native tongue, I wouldn't have understood it any better, [laughter] I tried to find some simple words like "of" or "the" or "and" that sounded English, but none of it sounded a bit English to me. He was declaiming this stuff to me, and he apparently thought he was doing it in beautiful English. I guess the expression on my face must have gotten rather curious, because I looked across the room and Cora was trying to keep a straight face. [laughter]

When he got through he wanted my opinion, and I didn't have the slightest idea, of course, of what to say. In this sort of paralyzed condition, the situation was saved for me in another strange way. All of a sudden, there was a crash as though the house had fallen in. The door to the courtyard was open and a cat, who'd been snoozing off to my right, flew through the air and out this door. Then there was more dust and clatter, and I didn't have the slightest idea of what had happened. Everybody, of course, was very much startled. This studio was on the ground floor and opened directly onto the court and next to it in this court was a wall. What had happened was that several square yards of plaster had fallen off the side of this building and had come down through the skylight. You can imagine what a racket that would make and what the disturbance would be. Well, that left the studio in a semi-habitable condition because of the glass and plaster and dust. Fortunately, it didn't do any special damage. I guess the glass broke the fall of the stuff to a certain extent and no other damage was done, so we collected our wits.

Then Cora went and made some more tea and got out some more cups and things. Jan took the little table and chairs outside into the courtyard to finish our tea. Well, we no more than got settled and collected ourselves, and started a little conversation again, when from behind me came the weirdest sound that I'd ever heard up to that time. I hadn't much idea of what a banshee sounds like, but this was about as close to the wailing of a banshee as I think: anybody could invent. Well, that kind of froze my blood again. [laughter] I didn't know whether somebody was being murdered or what terrible distress they were in, but I noticed that nobody else seemed to be the least bit concerned. And there was no reason to be because I heard this strange sound quite frequently afterwards. There was a poor little old woman who they said had been quite a successful singer in her day, and she was going around and singing for coppers. She was a beggar. But her voice, though it was strong and had a certain resonance, instead of having a modest kind of vibration which would be acceptable, had a strange kind of fluctuation of sound that sometimes I have heard in sirens—a wow-wow-wow-wow sound. It would rise up in this courtyard where the acoustics made it resonant, and this sound going up to the heavens was scary. It was the kind of an afternoon that a writer simply could not invent. [laughter] No amount of fantasy, it seemed to me, could describe the atmosphere and the succession of feelings that took place during that teatime."

I find this an utterly charming and intimate view into the life of expatriate artists in Paris about nine decades ago. 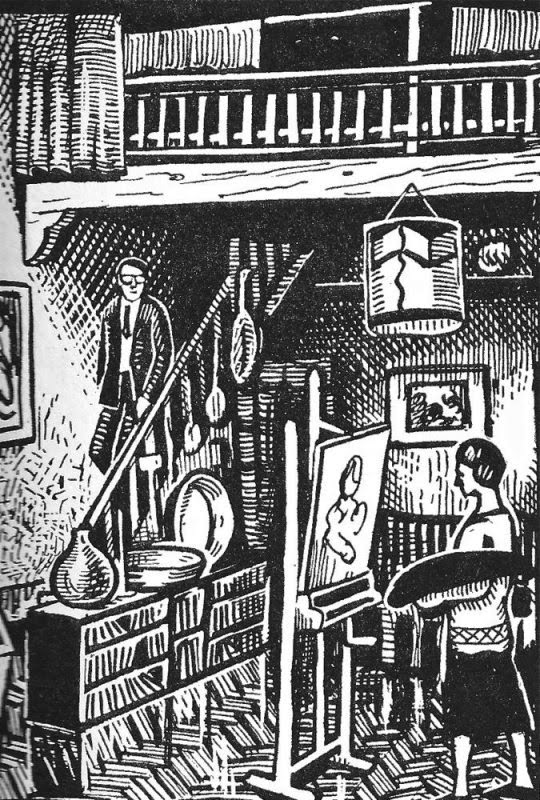