Perhaps with the exception of a phonetic "K" for Carco, in Jan Gordon's replacement of actual names with a single capital letter he uses the first letter of an individual's real surname.  Who could this "B---" be?

One German painter known to frequent the Closerie des Lilas (in the company of Edvard Munch) was Max Beckmann (1884-1950).

He wrote, in January 1904, "I come here so often that the waiters are amused. Perhaps partly because we were so drunk yesterday. The air is always the same, the gloom is always the same, and so is the urge to create." (quoted in "The Man who Invented the Third Reich" by Stan Lauryssens) 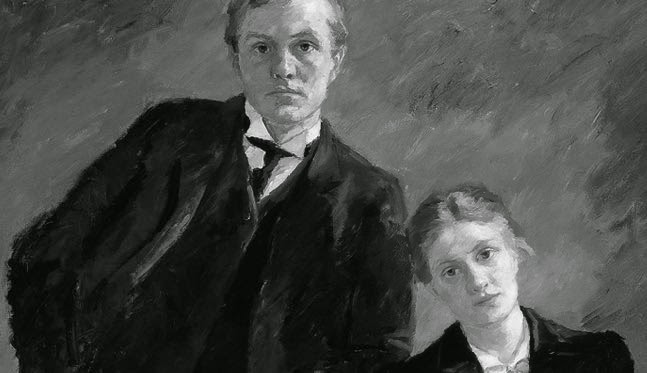 Max Beckmann and his wife Minna, 1909.  Modified from an image at the Berlinische Galerie Museum of Modern Art. There is another fine self portrait by Beckmann from this period, one of many that he made throughout his career, at the MoMA (New York).

Beckmann served as a medical orderly during WW1, his traumatic experience leading to a profound change from naturalistic and Romantic painting approaches towards a far darker and more angular style. In a late 1914 letter to his wife he wrote, “…my will to live is for the moment stronger than ever, even though I have already experienced dreadful things and died myself with them several times. Yet the more one dies, the more intensely one lives. I have been drawing, that protects one from death and danger.” In 1918 he he defined his new credo, stating his intention to “be part of all the misery that is coming.”

Successful during the Weimar Republic, he was immediately out of favour under Hitler's regime and was dismissed from his teaching position. His works were among those rounded up for the Entartete Kunst (Degenerate Art) exhibition which, after its opening in Munich in 1937, toured throughout Germany until 1939.

Eventually, in 1947, Beckmann moved to the USA where he was much respected. In 1950 he died of a heart attack on the way to see his exhibition at the New York Metropolitan Museum of Art (Self-Portrait in Blue Jacket).

Beckmann would seem to be a strong candidate (though by no means certain) for "B---" in Jan Gordon's 1916 piece, adding colour and "flesh" to another personality and frequenter of the Closerie des Lilas in those pre-WW1 years.